One calamitous half-hour against India on the opening night of the Women’s T20 World Cup had hung over Australia’s campaign like a swollen cloud. On Thursday night at the Sydney Cricket Ground, it almost broke and washed away their hopes of a fifth title.

But they managed to survive, much as they have throughout the tournament, their cricketing smarts and underlying class keeping them in the fight even when their performance was below its best. Now they get a chance, in Melbourne, to make amends against the unbeaten Indians. 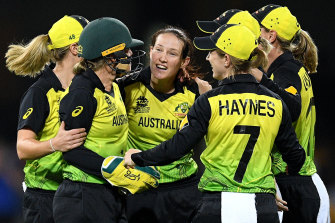 Repeating the recent pattern, Australia’s innings ticked ominously but never quite exploded. Healy’s bright start was cut short by a clip to mid-wicket. Lanning finally looked free to produce a destructive, match-sealing innings, but the loss of Beth Mooney, Jess Jonassen and Ashleigh Gardner in the space of 11 balls forced the captain to rein herself in and play a longer game, if such a thing is possible in this format.

Lanning’s adaptation to circumstances showed tremendous mental strength and maturity under pressure. Australia’s run rate plummeted as Lanning and Rachael Haynes sought to consolidate against an accurate attack, particularly from the combative young right-armer Nadine de Klerk and opener Shabnim Ismail. The dependable Haynes made another critical contribution before Lanning was able to accelerate again, albeit never quite cutting loose.

Australia’s 134-run total, owing so much to Lanning’s unbeaten 49, translated to a requirement of 98 from the 13 overs South Africa were left to face after another rain delay.

Two outstanding catches – on the boundary by Gardner and at cover by Lanning – punctured South Africa’s early momentum, and Australia came up with another professional effort in the field to get the win, notwithstanding some superb strokeplay from 20-year-old Laura Wolvaardt.

Some intelligent bowling from the experienced Megan Schutt and Delissa Kimmince was as necessary for Australia, in the end, as had been Lanning’s leadership with the bat.

The gap between Australia and the chasing pack continues to narrow. This will surely be the last World Cup when Australia can produce less than their best and still make a final. But they have done it, and perhaps when they arrive in Melbourne they will feel like the load has been lifted.

A rematch with India gives the event the final it needed, a genuine play-off between the world’s best.