Ellyse Perry, one of the most recognised names in women’s international cricket, says the WBBL has become such a strong competition and brand it does not need to be rebadged to reflect gender equality.

The dual international’s former sport, football, has rebranded its men’s and women’s leagues, but Perry believes cricket has let its actions do the talking to the point where the WBBL’s point of difference from the men’s competition should be celebrated rather than seen as inequality. 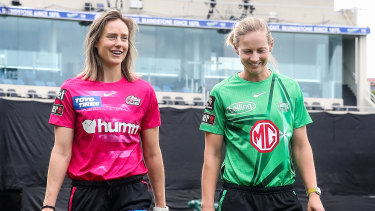 Ellyse Perry (Sixers) and Meg Lanning (Stars) relax in Hobart ahead of the new WBBL season.Credit:Getty

Her comments come after Cricket Australia announced pay increases for its women’s domestic tournaments, the WNCL and WBBL.

The WBBL, which kicks off its seventh edition on Thursday night, is widely accepted as the premier T20 competition in the world, and also a box office hit as the highest rating women’s league in Australia and fourth highest per game behind the BBL and the country’s two biggest football codes, the AFL and the NRL.

The rise of the women’s game prompted the Marylebone Cricket Club to formally adopt the gender-neutral term “batter” in its laws, but Perry, a champion for women’s sport, does not see the need for the “W” to be dropped from the women’s Big Bash for similar reasons.

“I don’t have a really strong opinion on that other than to say that, ultimately, the greatest sign of growth and impact or success for WBBL is for it to be a really revered brand in itself,” Perry told the Herald and The Age.

“I like the idea that it’s distinct from the BBL and people get really excited about the WBBL and that being its brand and product and a recognisable name.

“There’s positives to it. I understand the other side of it. You want everyone to sit along the same lines but, to me, the WBBL’s a huge brand for us. It’s something we want to continue to celebrate and push and make it stronger rather than changing it to conform to something else.

“By and large I think cricket has really pushed past that equality piece and really needing to pay attention to that and recognising it.

“I think we do that really well. For me now it’s more about celebrating the fact the WBBL is the women’s Big Bash, it’s a really strong product and people want to buy shirts with the WBBL logo, they want to tune in to watch games their favourite players play in the WBBL.

“It’s a really great point of difference; it’s something to be celebrated rather than looked at as inequality.”

Perry stopped short of rating the standard of the WBBL above international cricket but had no doubt the strength of the league was a major factor in Australia’s success on the world stage, as it exposed domestic players to high-pressure situations as part of their development.

The ability of Australia’s players to handle the big moments was evident in the team’s recent series success against India, which is yet to launch its female version of the Indian Premier League. Until India do, the WBBL will stand unrivalled with its blend of Australian internationals and domestic up and comers learning from and competing against the best from around the world.

“That’s built a great cohort of really professional players, and players are trying to step up if they’re given an opportunity at international level,” Perry said.

“Equally, the more high-quality games of international cricket you play the more you’re exposed to different situations or pressure environments so when you do play international cricket – the T20 World Cup was a great example of that – you’re able to deal with it and navigate your way through it and hopefully be successful.”