‘We’ve got some pace, some bounce, guys who can swing it’: Kagiso Rabada hails South Africa’s ‘formidable’ seam attack as England lose six wickets in just 32 overs on day one at Lord’s

Makhaya Ntini led a South African fast bowling attack in 2008 including Lord’s rookies Dale Steyn and Morne Morkel, with Jacques Kallis as the fourth member, that was said to be as potent as the great West Indian quartets of the 1990s.

It was lavish over-hype and it had its effect on Steyn and Morkel, who bowled poorly, straining too hard trying to live up to expectations.

Mark Boucher was in that team and remembers it well. This year he encouraged Anrich Nortje, Lungi Ngidi and Marco Jansen to cherish and ‘absorb’ Lord’s rather than ‘look around and get over it’ as Steyn and Morkel had been told to do. ‘There will be nerves on the first day, you can’t hide from them,’ the South Africa coach said. 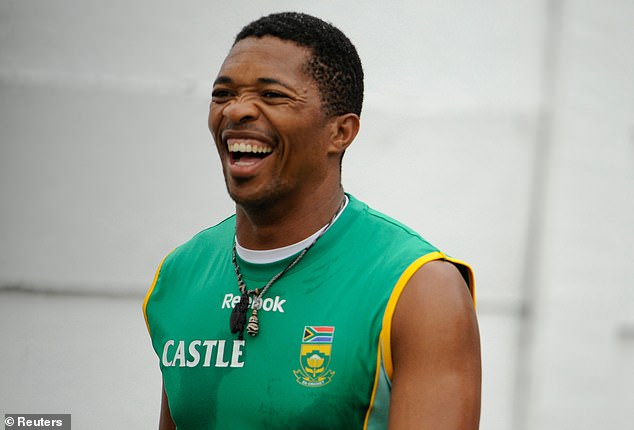 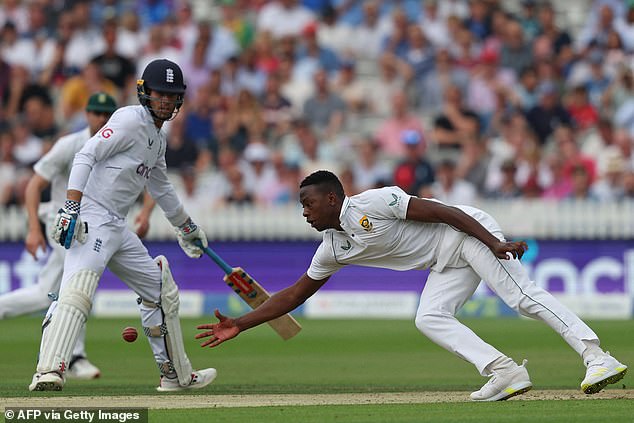 Whether the advice made the difference or not we’ll never know, but the three Lord’s rookies made a stunning first impression under the leadership of Kagiso Rabada, who played here in England’s 211-run victory in 2017.

Only Ngidi failed to make the batsmen play as often as captain Dean Elgar was imploring his bowlers to do but he sees his role in this line-up as providing ‘control’ with three out-and-out strike bowlers making up the pace attack. In such helpful conditions, Elgar happily dispensed with ‘control’ in favour of attack so he thanked Ngidi for his frugal five overs and didn’t use him again.

Rabada’s skills shone as brightly as the floodlights. Half a dozen inswingers to Alex Lees and then one angled across him for a catch to wicketkeeper Kyle Verreynne. It was like taking candy from a baby. He knew exactly what he had to do for Zak Crawley, too. 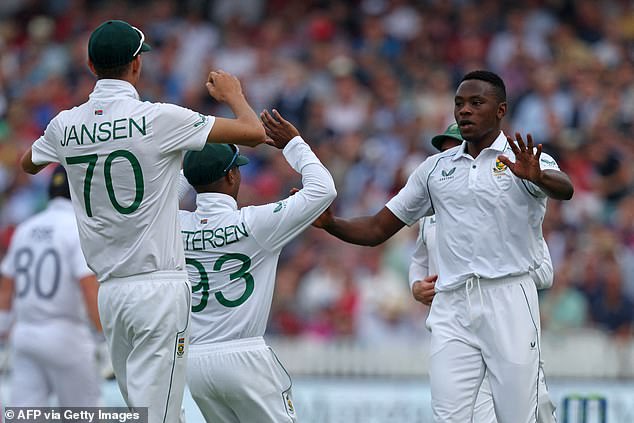 If it was candy for Rabada then Jansen and Nortje were like South Africans in a biltong shop, trying some for taste before choosing which pieces to slice and devour.

Jansen struggled with the slope of the ground in Canterbury during the Lions game last week but was encouraged to get used to it ahead of a similar challenge at Lord’s. And how he did, swinging the ball lavishly into the right-handers and snaring the prized wicket of Joe Root.

Like every genuinely fast bowler, Nortje thrives on the adrenalin of his own speed. These days, however, he has learned how to take the corners and when, to control the accelerator. Cartwheeling Jonny Bairstow’s middle stump for a fifth-ball duck with a 93mph inswinger was the biggest statement of the day. 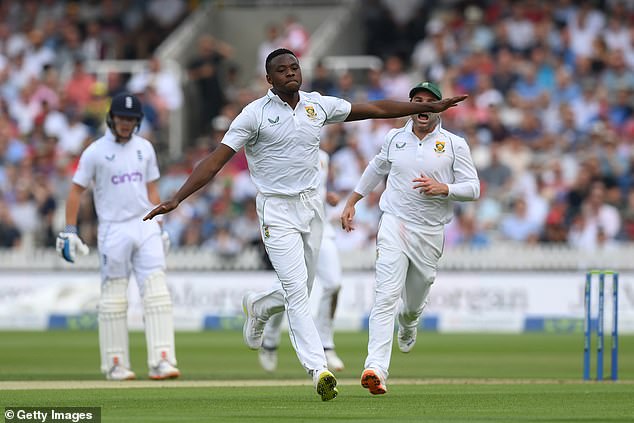 ‘They’re great players,’ Rabada said of Root and Bairstow. ‘Joe is a great — he just passed 10,000 runs. Jonny’s been in the set-up for some time, so he’s got experience and this summer he’s been churning out the runs. We respect the English, especially those two.’

And Rabada respects his own team, too. ‘We’ve got some pace, some bounce, guys who can swing it, who can bowl quick bumpers,’ he said after the close yesterday. ‘In terms of a pace attack, we have all the ingredients to be a formidable one.’

Indeed they do, and didn’t they show it on day one. The quick quartet’s battles with England’s gung-ho batting line-up will be thrilling to watch over the coming weeks.