American driver of the year Dexter Dunn is set to fly in to partner Alta Orlando in Saturday’s Miracle Mile at Menangle.

Dunn, a former star reinsman in New Zealand, has a family connection to Alta Orlando, who was impressive firing home over the top of former Miracle Mile winner My Field Marshal in the Schweppes Sprint on Saturday, running a 25.6-second final quarter. 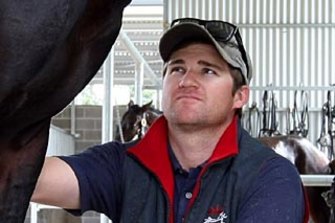 Luke McCarthy believes what whatever he drives in the Miracle Mile, King OF Swing or Alta Orlando, he has a great chance

Alta Orlando’s win came after stablemate King Of Swing ran a 1.49.6 mile in the Allied Express Sprint to give Craig Cross two runners in the Miracle Mile, but their drivers remain undecided.

Luke McCarthy, the stable driver for Cross, will look for his first Miracle Mile victory in the sulky on either King Of Swing or Alta Orlando.

“We have two of the best chances in the Miracle Mile,” McCarthy said. “They are both flying at the moment.

“I will be on one of them and I would be happy to drive either. We are waiting to hear back from Dexter if [he] can make the trip from America, if he does I will [be] on King Of Swing.

“If not I will drive Alta Orlando and Gary Hall jnr will come over from Perth to be on King Of Swing.

“It’s not a bad situation when you can call on two of the best drivers in the world for a $1 million race.”

King Of Swing has been rejuvenated since coming to Sydney from Western Australia. He was bought by owners in the Gary Hall snr stable a couple of years ago for $400,000 after winning the Breeders Crown as a two-year-old.

He won a WA Derby at three but since then had really failed to delivered on his ability. His owners decided to sent him to Cross at the end of last year after a lacklustre four-year-old season and beginning to his five-year-old campaign.

“Gary just sent him over saying he just needed a change of scenery,” McCarthy said. “He wasn’t sure  why it was that he wasn’t showing his best.

“He has really flourished over here.”

King Of Swing has won three of his four starts for Cross, including running a 1.48.7 mile in the Perc Hall Stakes before winning the Hunter Cup at Melton.

“He has just liked being on the big track and is showing now why they paid so much for him,” McCarthy said.

The elite field of eight for the Miracle Mile was announced on Saturday night with Bettors Heart, which won the Ladyship Mile, and two-time Inter Dominion heat winner AG’s White Socks taking the final spot.

Hail Christian would have to be considered the unlucky runner to not make the field after just failing to grab Majordan in the Newcastle Mile and running fourth without luck in a qualifier on Saturday night.

King Of Swing has been made $2.80 favourite after getting the best of the draw coming up with gate four. The draw cruel to the chances of Chariots Of Fire winner Lochinvar Art and Majordan came up with the outside two gates, which are yet to produce a winner of a Miracle Mile at Menangle.