Cox Plate winner State of Rest will not back up in the Mackinnon Stakes and chase a different multimillion dollar spring carnival group 1 prize.

Joseph O’Brien’s son of Starspangledbanner, who saw off Anamoe in a driving finish to Australia’s weight for age championship race and then survived a lengthy stewards’ inquiry to keep the prize, will have a spell back in Ireland, stable representative Mark Power has revealed.

State of Rest’s future performances will be the subject of much scrutiny by Racing Victoria given the debate his win in the Plate has engendered on both sides of the world. 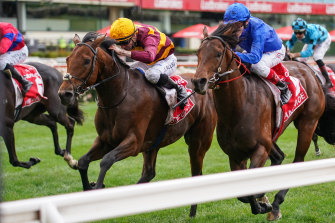 The colt had not figured in any of the main three-year-old races during the European spring and had achieved his sole group 1 victory before his effort at The Valley when he landed the Saratoga Derby in early August over 1900 metres.

Usually American turf group 1 races, particularly over trips exceeding sprint distances, are a notch or two below their equivalent in Europe as most of the top US horses run on dirt.

But behind State of Rest that day in the US were horses like Bolshoi Ballet, the Aidan O’Brien-trained colt who had started favourite for the Epsom Derby and the useful Irish challenger Cadillac. While none of them are proven group 1 performers they gave that field some depth.

Aerial view of the controversial Cox Plate finish between Anamoe (left) and State of Rest.Credit:Channel Seven

Reaction to State of Rest’s Plate win was mixed. Some took it at face value, arguing that he was an improving three-year-old who was best on the day, others decried it and suggested his win was a testament to how weak Australia’s middle distance division (races exceeding 1400 metres) was.

Paul Bloodworth, Racing Victoria’s international manager, believes it is far too soon to deliver a verdict.

“It’s a bit harsh to call him a B-grader in as much he is a very lightly raced horse who has got an upward spiral,” he said.

“The owners’ representative said he was a horse they were going to target at the European Classic races this year, like the Guineas, but he had a setback earlier in the year which meant they couldn’t.

“If he had had the chance he may well have shown that he is a very good horse a lot earlier than he did.

“Talking to the people there I know they have plans to run him in group 1 races in Europe next year, so you would think races like the Tatts Cup (at the Curragh in May) and the Eclipse Stakes (Sandown in July) would potentially be targets for him.”

Bloodworth, however, knows what course he would like the O’Brien camp to take – even if it is a long shot.

“I would love to see him return for the All Star Mile. That would be great to see the defending Cox Plate champ come back and go into that race fresh, then come back later in the year and defend his Cox Plate crown.

“The proof will be in the pudding. If he goes back to Europe and runs well in some of their better races I guess we will find out then what grade he is.

“If he does that you would have to think he would be considered much better than a B grader.

“He was desperately unlucky in his first up run at the Curragh, he should have won that day, and then he has gone to America and beaten a reasonable field, one which had a little bit of depth to it.

“Then he has come out here to win the Cox Plate beating our best three-year-old and probably our best older horse since Winx in Verry Elleegant. You can look at that as an indictment on our horses, or look at it and think he must be a pretty good horse if he can beat gallopers of that calibre.

“It’s too early to make the call on him until we know more. You might look at his two-year-old form and say that it is not that flash, but that was mostly over 1200 and 1400 metres. He is clearly a horse who wants 2000 metres, and he got it at the valley.”