Who faced the most balls in the 2019 Ashes series? Steve Smith, obviously. But who faced the next most, working his way through no fewer than 896 deliveries hurled down by the likes of Pat Cummins, Josh Hazlewood, James Pattinson and Mitchell Starc? Rory Burns.

Though he has a modest overall Test record, pockmarked by a difficult series on seaming surfaces at home and spinning decks overseas, Burns looms as the most likely top order accumulator for England to rely on opposite Joe Root and Ben Stokes. 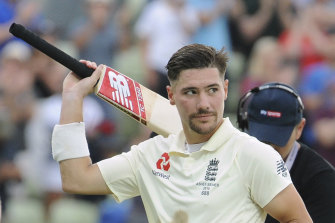 Only Steve Smith faced more balls in the 2019 Ashes than England’s Rory Burns.Credit:AP

Certainly last time around he was a source of frustration for Australia, digging out 390 runs at 39 to do far better against a moving ball than any of Australia’s left-handers. In Australia, where bounce is more of a threat, but the ball won’t be swinging all day, Burns would like to follow in the wake of Chris Broad and Alastair Cook as England’s anchors at the top.

“Generally sides that do well, their top order performs for themselves but also to try to get scores together as a team and a group and letting your middle order have best use of the conditions as well,” Burns said from resort quarantine in Queensland. “From that aspect it suits my skill-set a bit more in terms of conditions we get at home are often seamer-friendly, and I like pace on the ball.

“So out here with the Kookaburra and those sorts of things, that initial stage is obviously very important, but there are times where it can be difficult for bowlers if you get it right. So, [it’s] about being able to adapt to those conditions, absorb pressure when you need to do, and try to reapply it when you can.”

For a long time, it looked like he would be partnered by Dom Sibley, before England’s coach Chris Silverwood switched to the 24-year-old Haseeb Hameed during the India series cut short by the postponement of the Old Trafford Test. Burns certainly got plenty of time two years ago to size up Cummins and Hazlewood in particular, making him very much the senior partner.

”They’re the two spearheads, and they’re very good operators,” Burns said. “They don’t give you a lot of bad stuff, they’re pretty relentless when they get it right, and they bowl at good pace. What I’d say I’ve taken out of it is the fact that I’ve been able to see them, to play against them before, I’ve got a good picture of how they operate.”

Like most of England’s players, Burns has his own Australian links. He played club cricket for Tea Tree Gully in Adelaide with Travis Head, and for Randwick Petersham in Sydney with Moises Henriques and Nathan Ellis. He was also coached by Michael Di Venuto at Surrey before the former Australia ODI opener returned home.

“We spoke about batting a lot, certain shots you can and can’t play,” Burns said. “He was very much a pull and cut and quite aggressive, so he’s obviously given me a lot of little snippets along the way, and I’m looking forward to catching up with him.”