David Warner’s early Christmas gift from Ben Stokes has come at a price in the form of a rib injury that may see the opener play through a Test series under duress for the second season in a row.

England’s concerns are even more pressing, with Stokes and seamer Ollie Robinson both feeling the pinch after limited preparations, spinner Jack Leach in pain of a different kind after copping a pasting, and their batting reinforcements steam-rolled by Australia’s second-string attack in an “A” game.

Warner was cleared of a break by scans taken on Thursday night but the pain from his badly bruised ribs must have been significant to prevent the tough-as-teak veteran from taking the field for England’s second innings. Cameras spotted him resting in the rooms with what appeared to be an ice pack on his right ribcage.

Warner was struck in the ribs by Mark Wood and Stokes on the second day, the latter blow coming after he had been bowled by the all-rounder from a no-ball. 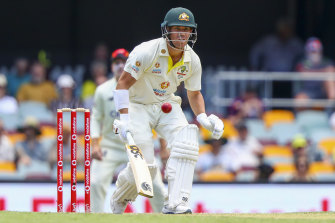 David Warner has badly bruised ribs, but has been cleared of a break.Credit:AP

That Warner’s ribs have not been broken bodes well for him lining up for the pink-ball Test in Adelaide starting Thursday, but such injuries can linger and cause significant discomfort for weeks.

“It’s very painful, it hurts to cough, sneeze, laugh,” former Test star Michael Hussey said on Fox Cricket. “It can take a long time to heal. Mine was minor bruising, and I was still feeling pain six weeks later. If it gets you in the wrong spot it can be quite debilitating.”

Warner failed to make an impact in the final two games last summer against India after what he later conceded was a premature comeback from a groin tendon injury, highlighting the difficulty of playing well when not at full fitness.

It would be a massive blow for Australia if Warner was to be ruled out next week as the 35-year-old remains an integral part of the side despite being in the twilight of his career.

His 94, along with Marnus Labuschagne’s 74, laid the foundation for Travis Head to take the game seemingly beyond England’s reach with a blistering 152 off 148 deliveries.

Should Warner be unavailable, it would pave the way for Usman Khawaja, overlooked for Head for the No.5 berth, to return to the baggy green for the first time since his omission during the 2019 Ashes.

Khawaja has batted primarily at No.3 in his Test career but averages 96.8 as an opener with two centuries, including one under lights against South Africa in Adelaide deputising for Warner, who had miscalculated the time he spent off the field while seeking medical treatment.

As Joe Root and Dawid Malan fought to save England, their fringe batters blew the chance to stake their Test claims as the England Lions were bundled out for 103 by Australia A.

England’s selectors will likely give their incumbent top six another chance in Adelaide but will be concerned at the lack of competition from beneath.

Leach faces a tall order to keep his place in the XI after returning some of the most expensive figures in Test history amid an onslaught led by Warner and Labuschagne. His economy rate of 7.84 runs per over is the fourth highest for any bowler who has conceded 100 or more runs in Test history, and goes against his primary role of holding up an end to reduce the burden on the quicks.

Stokes’s knee was only “jarred”, England say, and he bowled three overs on Friday, but will be monitored with the short turnaround before the start of the next Test on Thursday.

Robinson also returned to the bowling crease after leaving the field with a cramp the night before. Though not reliant on his speed, Robinson’s pace dropped to about 117 km/h on the second day, well short of what is required to worry Test-class batters.