Indian teenager Shafali Verma saved the day for the likes of Alyssa Healy and Ash Gardner after producing a maiden WBBL half-century to secure victory for the Sydney Sixers on Sunday in a final-over thriller.

Verma, who this year became the youngest player, male or female, to represent India in all three formats of international cricket at just 17, hit 57 off 50 balls in her second Big Bash game to take the Sixers to a five-wicket win at Hobart’s Blundstone Arena. 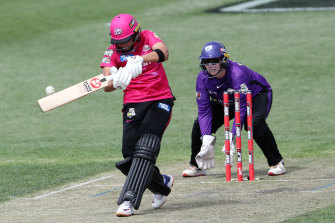 Shafali Verma flays a delivery to the leg side during her match-winning innings for the Sixers on Sunday.Credit:Getty

Her efforts pushed the Sydney side to successfully chase down the target of 126 set by the Hobart Hurricanes with three balls to spare.

The knock was made even more impressive following the dismissals of star duo Alyssa Healy and Ash Gardner, who both managed just three with the bat.

After the match, Sixers recruit Nicole Bolton was full of praise for the teenager’s performance in such a high-pressure situation.

“We all knew what she was capable of,” Bolton said. “I thought for someone that is 17; that is years beyond. Hopefully, now she’s got that confidence that she’s stepped up and won us the game with her bat, and hopefully that will take her through the rest of the tournament.”

Verma’s success with the bat was assisted by the bowling efforts of Ellyse Perry and Maitlan Brown who took 2-9 and 2-23 respectively to heavily restrict the Hurricanes.

Perry followed up her bowling efforts with 27 runs in a support role to Verma.

Hurricanes star Molly Strano (3-19) collected her third wicket to end Verma’s knock and give Hobart a glimmer of hope.

But, needing just two runs from the final five balls, Bolton (17no) and Brown (4no) finished the job for Sydney to record their second win from two games.

Cricket Australia pushed ahead with this weekend’s games with no spectators, with all players now under strict biosecurity protocols after a COVID-19 scare plunged Tasmania into a three-day lockdown on Friday.

The return to bubble life came shortly after all NSW and Victorian-based players completed two weeks of strict hotel quarantine.

Bolton, who is from Perth, said all players were taking the return to the COVID-19 protocols in their stride.

“For the girls that have already been privy to the two weeks and had a little taste of freedom and are now back in lockdown, I can’t really fault how they’ve been around the group,” she said after the game on Sunday.

“Even though they’ve done it tough, I think the teams that really bind well together during lockdowns or whatever is thrown at us are going to go a long way in the tournament.”