Bloemfontein: Australia's white-ball stars will continue their gruelling path to the men's T20 World Cup when they return to home shores after a long summer gap.

The likes of Steve Smith, David Warner, Aaron Finch and Mitchell Starc have been somewhat off the radar on a white-ball tour of South Africa. 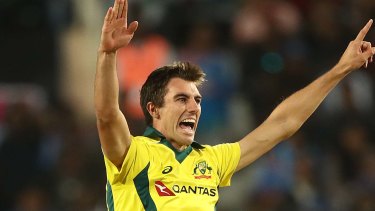 Pat Cummins will be one of Australia’s busiest players.Credit:Getty Images

It has been almost two months since Australia's men played an international fixture at home – a situation forced by an agreement with India to play an ODI series there in January.

That in turn forced Cricket Australia to push back a three-match ODI series against New Zealand which will start in Sydney on March 13, the latest finish to an international season in Australia outside World Cups since 1979.

Aaron Finch's squad will return from South Africa next Monday and have just a few days to get their bearings before the start of the trans-Tasman series.

"Monday night fly in, Tuesday let them sleep and rest and try and get into the time zone, Wednesday have a light run and assess everything on Thursday.

"If someone hasn't travelled well then potentially you do try and factor that in for the team you pick on Friday. Then a short turnaround to Sunday (for game two).

"A few management issues when we get back on the ground there but that's not uncommon with the way the schedule is these days."

The home series against the Black Caps is followed days later by a T20 tour of New Zealand.

Smith, Warner, Pat Cummins and several others will then play in the IPL season which runs to the end of May.

All of those players would be expected to be called upon to play in the Test tour of Bangladesh in June and July.

Australia also have a white-ball tour of England in July followed by a number of players staying on for the inaugural season of The Hundred.

The latter stages of The Hundred are expected to clash with Australia's home ODI series against Zimbabwe in August.

West Indies are also slated to play matches in Australia before the T20 World Cup starts in October.

The packed schedule presents national selectors with a significant challenge as they look to balance player workloads with building continuity in the white-ball teams.

McDonald said it was unlikely players would be rested for the second ODI against South Africa in Bloemfontein after Australia lost the series-opener by 74 runs.

"It'd be difficult to see any changes," he said.

"I don't think there will be an knee jerk reactions to what happened in Paarl."

New Zealand, meantime, have announced their squad for the tour of Australia.

The Black Caps will have their first-choice pace attack restored for the series in Australia.

Spearheads Trent Boult, Lockie Ferguson and Matt Henry are included in the 15-man squad for the three-match series starting next week after injury forced all three to miss the 3-0 ODI clean sweep of India.

The trio all played little or no part in the Black Caps’ humiliating Test whitewash from Australia over the Christmas period due to a variety of ailments.

Ferguson and Henry have only played domestic cricket since then but left-arm swing merchant Boult returned in a starring role in New Zealand’s just-completed 2-0 Test series defeat of the Indians.