Justin Langer maintains Steve Smith could still be considered for the Australian leadership despite selectors choosing Matthew Wade as Aaron Finch's replacement on Sunday night, saying "there is a process to go through until he becomes captain again".

Wade was installed as temporary Australia captain for the second Twenty20 match between Australia and India at the SCG after Finch suffered a hip injury in the first match of the series in Canberra on Friday and was ruled out. 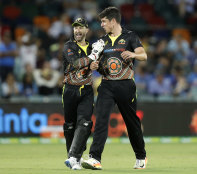 "To me, now we've got to move on [from Cape Town]. Steve Smith is still looked at by this side as a leader in that team; even Finch, the one-day-T20 captain and Tim Paine go to Steve Smith for advice at times. He's a senior player. I'm sure he'd like another opportunity."

It was not a call selectors were willing to make yet but Langer indicated Smith could still be considered in the future.

"Steve Smith has done a brilliant job in the past. There is a process to go through until he becomes captain again. We’ll go through that," Langer told Fox Sports before the match.

"We know what a great player he is, we’ve seen that his whole career. When the English crowd gave him a standing ovation at the Oval last year, talk about earning respect, and earning back respect … [it was] one of the fondest moments of my coaching career. He’s doing all the right things to show leadership without a title at the moment."

During an interview with The Sydney Morning Herald and The Age last week, Langer said management talked about a succession plan for [Test captain] Paine “all the time”.

“At the moment Patty is the vice-captain. Over the journey over the last five years we’ve had Josh Hazlewood, we’ve had Mitchell Marsh, we’ve had Alex Carey, we’ve had Travis Head all being vice-captains of the team. It’s all part of the plan of building the capacity of our leadership group,” Langer said.

While Taylor backed Smith, fellow former Test captain Steve Waugh told ABC radio on Sunday that Cummins had the makings of a captain.