Racing NSW boss Peter V'landys has launched defamation proceedings against the ABC and journalist Caro Meldrum-Hanna over a expose aired on 7.30  late last year, which revealed acts of cruelty against former racehorses across Australia.

Federal court documents obtained by the Herald state Mr V'landys will argue he was "greatly injured" by his portrayal in the segment, with his business, personal and professional reputation brought into "public disrepute, ridicule and contempt". 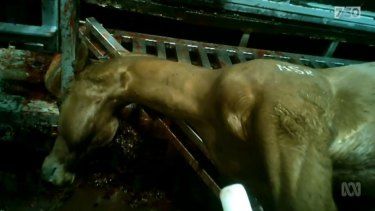 In the segment, Mr V'landys also questioned what the people "attacking thoroughbred racing" were doing about the thousands of domestic cats and dogs abandoned and euthanised each year, a statement which was condemned by racing figures in NSW.

His legal team, headed by Bruce McClintock SC, will argue before the court that the segment implied Mr V'landys "callously permitted the wholesale slaughter of thoroughbred horses" and "dishonestly asserted that no racehorses were sent to knackeries for slaughter in New South Wales when he knew that was untrue".

They will also argue that the program made out that due to his "indifference to their suffering", Mr V'landys' had "ignored the cruelty to which thoroughbred horses were subjected to in a Queensland abattoir."

"By reasons of the matter complained of, the Applicant has been greatly injured and his business, personal and professional reputation has been, continues to be and will be brought into public disrepute, ridicule and contempt," court documents state.

Mr V'landys will also argue that the segment implied he was lying when he said that Racing NSW "cared about the welfare of thoroughbred horses" and took "adequate steps to protect their welfare".

"It's before the courts and we will be pursuing it vigorously," Mr V'landys said.

A spokeswoman for the ABC said the company would be "defending the proceedings".

A case management hearing is listed for April 2 in the Federal Court.