As David Warner prepares to return as captain of Indian Premier League franchise Sunrisers Hyderabad, his manager has questioned whether the time has come to test whether Warner's leadership ban in Australian cricket should be revoked.

James Erskine, an agent to celebrities and sports stars, said there had been a "lynch mentality" in the immediate aftermath of the sandpaper scandal against South Africa in Cape Town in March 2018, and Warner had endured the brunt of this.

Then vice-captain Warner and skipper Steve Smith were each banned for a year from playing by Cricket Australia for bringing the game into disrepute, while impressionable "junior" batsman Cameron Bancroft was suspended for nine months. 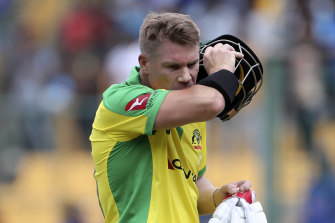 David Warner: could he be a leader again in Australian cricket?Credit:AP

However, Smith, with the Rajasthan Royals, and Warner have been deemed of good enough character to lead their respective IPL franchises this season. Warner had led the team from 2015 to 2017 before being replaced by Kane Williamson upon his suspension.

Warner's focus since his return to the Australian team has been on assimilating with teammates and scoring runs, and he has done that well, to the point he was this month voted the Allan Border medallist.

He and Smith returned to Cape Town this week for the first time since the scandal, and were instrumental in Australia's thumping win to claim a 2-1 series victory.

At 33, there is almost certainly little chance Warner would have the opportunity to captain or deputise in an Australian side in any of the three formats, but there could be an opportunity in the Big Bash League if he chose to return to the Twenty20 competition.

Erskine said he and Warner would discuss the issue soon after Australia's home campaign finished – there are three one-day internationals against New Zealand next month – and depending on this he would seek a meeting with CA chief executive, Kevin Roberts.

"It's a conversation David and I have to have and rehash again. We will see," Erskine said.

Warner, who opted to not appeal at the time his punishment was handed down, could also decide to now in a bid to have that stain removed so it does not follow him into retirement.

CA said it was too early to comment and would wait for Warner and Erskine to make their decision.

Erskine said the mood of the Australian public and cricket officials would have to be gauged, because there was "no point in having a big barney with Cricket Australia if you want to carry on playing Test cricket".

Warner says he still has much to achieve in Test cricket, with Twenty20 internationals set to be the first format he cedes within the next two years.

Erskine claimed Malcolm Turnbull, the Australian Prime Minister at the time of the controversy, had contributed to the demise of Warner, whom a CA investigation said had been the mastermind of the plan to get Bancroft to artificially alter the ball in a bid to extract reverse swing. A stunned Turnbull said at the time the incident "beggars belief" and he had expressed his disappointment to then CA chairman, David Peever.

"The whole of the madness of what happened, happened for two reasons. One, Malcolm Turnbull, who in fairness knows bugger all about sport, jumped up and down like a pork chop and said it was a disgrace and wanted answers," Erskine said.

"The second thing was, everyone started talking in South Africa, not knowing the reaction of what happened in Australia. I can understand how the whole thing snowballed but I don't think the results were fair and were handled particularly well. Certainly Turnbull didn't help, and I count him as a friend."

The parameters of the mysterious CA report into the scandal conducted by former CA integrity chief Iain Roy were restricted to the events of that Test, with only Warner, Smith, Bancroft, Peter Handscomb and coach Darren Lehmann interviewed, therefore potentially curbing "the-who-knew-what" speculation and limiting the extent of punishment

That Roy was removed by the governing body only months after without any clear explanation added to the intrigue.

Meanwhile, Erskine said Warner might not play at all in England's new Hundred competition, for the tournament in part clashed with Australia's slated white-ball series against Zimbabwe in northern Australia.