David Warner’s timely return as a major force has given a resurgent Australia an extra spark heading into their grudge match against England at the Twenty20 World Cup.

In the space of a week, Aaron Finch’s men have transformed from T20 easybeats into a team that every other nation in the tournament would like to see the back of.

The win over South Africa last week was scratchy but the emphatic defeat of Sri Lanka in the early hours of Friday morning (AEDT) justifies why confidence is so high in the camp that a full-strength Australia side can succeed where their predecessors have failed by claiming a maiden T20 world title.

The litmus test comes on Sunday morning against white-ball wizards England, who have blazed their way to two crushing wins over the West Indies and Bangladesh in their opening two games. It could be the first of seven meetings between the two fierce rivals this season.

Victory for Australia would leave them needing just one win from their final group matches against their winter conquerors the Windies and Bangladesh for a berth in the semi-final – widely seen as the pass mark for the team.

Warner’s return among the runs is a major piece of the puzzle for Australia, whose rut in the shortest format has coincided with their woes at the top and their dynamic opener’s absence from the side. 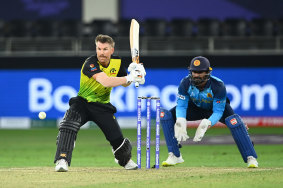 His 63-run stand with Finch against Sri Lanka was Australia’s highest opening partnership in 22 games – a period that dates back to game one against England in Southampton in September last year.

The Warner of 2021 is more Reverend than the Bull but the energy he brings to the Australian side when he is on song is priceless, not just with the bat but also to the mood of the team.

“Dave is a huge player for us. You know for the last decade he has been huge for Australian cricket. I think as well opening the batting, that’s where you can really set up the innings,” vice-captain Pat Cummins said.

“You saw yesterday, you know the way [Warner] and Finchy took the game on. It makes those kind of 150 targets either, you know tough to get or you feel like you’re well ahead of the run rate straight away. So he was fantastic.

“And he’s someone that our whole team absolutely loves to play alongside, we all go with him and back him up. It’s fantastic to see him back [in form].”

The source of much consternation only days ago, nearly every member of Australia’s frontline batters have made an important contribution now that Finch and Warner are back among the runs, except Mitchell Marsh, who was not required with the bat in the seven-wicket win over Sri Lanka.

“So I think another great thing about these first two games is it feels like everyone in the XI played a huge role in it,” Cummins said. “Just about everyone’s fired and is riding high on confidence, so it feels like it’s all coming together.”

Australia overcame a slow start with the ball then turned in a clinical display with the bat to overhaul Sri Lanka’s target of 155 with three overs to spare.

Warner set up the run chase with a destructive 65 off 42 balls after player of the match Adam Zampa turned the game with an excellent spell of 2-12 from four overs.

Victory over the world No.9 may not appear that impressive on paper, but Sri Lanka are match-hardened and accustomed to the local conditions after winning their way through to the Super 12s against the associate nations.