Nathan Lyon believes Australia have earned the right to become the world’s best men’s Test team over the next two years, after a decade in which senior players learnt the hard way that there is more to success than winning games.

Lyon has not celebrated a Test match and series victory in Sri Lanka in the 11 years since his triumphant first attempt. He knows through experience that such moments are few and far between unless a team unites around common goals and a shared perspective. 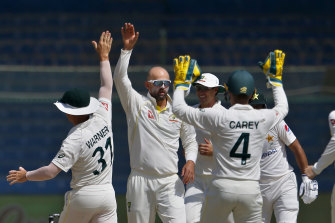 Nathan Lyon celebrates a wicket while on tour in Pakistan earlier this year.Credit:AP

Whether it is serious injury (Pat Cummins, Mitchell Starc, Josh Hazlewood), the shame of the Newlands scandal (Steve Smith, David Warner), selection decisions (Usman Khawaja) or the spectre of fourth-innings failure (Lyon himself), the Australian men’s team has a treasure trove of experience to call upon.

Those difficulties have helped the Australians reach a place under Cummins’ leadership where they understand that victories are not the only currency for success: the warm reception they have received for playing with good grace in Pakistan and Sri Lanka has been noticed by Lyon.

“I think that’s part of growing up,” Lyon told The Age and The Sydney Morning Herald. “There’s been a lot of us together for the last 10-11 years – we spend more time together than we do with our own families – so it comes down to being good people. With Pat, his guidance, everyone sees he’s a brilliant person, and I think that shows in the way he goes about it. Everyone’s jumped on the back of him and really enjoying that experience.

“So it’s just about being good people and enjoying this part of the world. Sri Lanka is going through a pretty tough time at the moment and we’re able to bring so much joy to their faces, just being here playing a game of cricket, that we love doing. It’s pretty remarkable that we’re able to do that just by playing the game.”

‘We’ve been at the absolute bottom and, hopefully, we’re on our way up to the pinnacle.’

Lyon is adamant the Australian side is still growing – something demonstrated by the players’ forbearance and success in Pakistan, where previous teams would likely have lost patience and composure.

“I think we deserve it [to be the best],” he said. “I know that sounds quite arrogant, but we’ve done a lot of hard work as a team and gone through some ups and downs, but I think we deserve some late reward in all our journeys.

”We’ve got the experience and skill to actually achieve this around the world, and we’re on a journey to becoming hopefully a great Australian cricket team, and that’s what our goal should be. If you ask Pat, that should be his end goal. But we’re far from that at the moment – we’re improving and heading in the right direction. But there’s a big group of senior players here that have been around for a long time.

“You have more bad days than good days in Test cricket, so we’ve been at the absolute bottom and, hopefully, we’re on our way up to the pinnacle. The Test Championship is a big goal for me. I think if we keep playing a positive brand of cricket then hopefully we’ll be in that final and give ourselves the best chance to win it.”

Lyon laughs off talk he might finish up in a year or two, and points to the insights offered by new assistant coach Dan Vettori as an example of where he, 108 Tests and 427 wickets into his career, can still improve.

“I’ve still got the itch,” Lyon said. “Having someone like Dan Vettori on tour here, I’m bloody excited about it because having the last three sessions with Dan, I’m starting to get a lot better, potentially tactically but also with subtle little wrist movements that he was very good at.

“You talk to Dan and he wasn’t the biggest turner of the ball, but he was so good at subtle variations. There’s no end in sight for me – I’m hungrier than ever, I’ve got some big goals I want to tick off personally and as a team. So if I do those goals personally, we’ll pick off the team goals. No end in sight for me.”