Doing the rounds on Instagram at the moment is an advertisement for a signed piece of “official” Ashes memorabilia, with an indicative image, a bunch of lines like “Australia won the series x-x” and pro-forma scribbles in place of actual signatures on a bat.

Not only a form of late capitalism, where the sale is being made before the “memorable moments” themselves have all taken place, this item also serves as a reminder of the curious place held by dead Test matches in our collective memory. 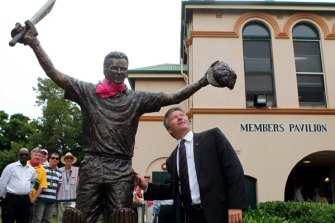 A dead Test match, as is the case in both Sydney and Hobart over the next couple of weeks, can feel somewhat diminished. The fate of the Ashes, after all, was concluded beyond all doubt by Scott Boland in a mad few minutes at the MCG.

But ask yourself a question: what do Steve Waugh’s SCG hundred in 2003, Mark Waugh’s debut century in 1991, Dean Headley’s MCG miracle in 1998 and Mark Butcher’s innings of a lifetime in 2001 all have in common?

Answer: All these indelible Ashes moments took place in dead Test matches, after the fate of the urn was already decided.

There is actually a case to be made for the fact that dead Ashes Tests have historically provided just as many individual performances and interludes to savour as any of those played when a series was still up in the air: with the exception of only a handful of classic series that went down to the final match.

Certainly, the prefab memorabilia will most likely be fleshed out with numerous instances to savour over the next five days, whether it is Joe Root finally making a century in Australia, Steve Smith notching three figures of his own, or one of the bowlers setting down a marker for the future.

Through no choice of its spectators, Sydney has become something of a Mecca for dead Test matches over the past 23 years, from the moment the Australian Cricket Board decided not to stretch the Test schedule into late January and early February.

The first of these games was a cracker – a low-scoring duel on a tinder-dry SCG surface that turned expansively from the first afternoon, allowing Stuart MacGill to twirl through 12 Englishmen either side of Michael Slater’s fortunate third-innings hundred.

Topmost of all these individual feats, of course, is the Steve Waugh century, a performance so indelible that, never mind the result of a match won resoundingly by England, it is the basis for the bronze statue of the former captain outside the SCG members pavilion.

For Smith, who never got to an Ashes Test in person as a child but instead watched on television like most of the country, Waugh’s open defiance of the counsel of selectors to finish his career that summer was well worth holding the Nine news for.

“Tugga scoring the hundred off the last ball was a pretty special one,” he said. “I think I remember they didn’t go to the news and that was a rarity back in those days when we watched that last ball. That was my most vivid memory.

“I always loved watching games at the SCG, they’re always great spectacles, and hopefully we can create some good memories this week for people coming out to watch us.″⁣

Something a little more team-oriented than the Waugh-fest (which also spun off a book and a DVD, though no prestige Netflix drama series as yet) is how dead Tests at the end of one series can in fact provide a springboard to another.

In 1968, England were outpointed by Bill Lawry’s Australians in a dour series, but Derek Underwood beat the rain – with the help of enthusiastic spectators at the Oval – to bowl the tourists out on the final day to secure a drawn series. Ray Illingworth then took much the same side to Australia in 1970-71 and carved out the series win that ended Lawry’s tenure.

By 1972, the roles were reversed. A younger Australia lost the Ashes on a questionable pitch at Headingley, before Ian Chappell’s team won a rousing victory at the Oval to claim what they considered to be a moral victory – undoubtedly the start of their march towards resounding Ashes success at home in 1974-75.

In 1987, Allan Border ended the most wretched run of his early captaincy with a nerve-jangling victory over Mike Gatting’s visitors at the SCG.

So unsure of himself at the time was Border, that late in the day he put the question of who would bowl the next over to a vote. Peter Sleep, as it happened, ended England’s resistance with one over remaining. Border regained the urn in England in 1989 and Australia hung on to it for 16 years.

That brings us to the moment that, while less storied than Waugh’s hundred, was much the more lasting takeaway from the SCG Test of 2003. England, led by Nasser Hussain, put together a methodical and professional display to defeat Australia and finish the series 4-1 rather than 5-0.

Next series, of course, was the epochal 2005 contest. That’s reason enough for Root to try to get the best out of his players this week, and for Pat Cummins to want to keep his foot on English throats. The memorabilia can wait.