As much as the Sydney Cricket Ground is a shrine to cricket’s history, it is also the signal monument to the power of television in the game – specifically, the power of Kerry Packer’s vision for it.

The light towers that allowed day one of the fourth Ashes Test to get to as many as 46.5 overs under grey skies, amid the now traditional New Year’s Test rainfall, were rushed into existence by Packer during his two-year takeover of elite cricket in Australia in 1978.

And the unveiling of a “Richie Benaud Media Centre” in the Bradman and Noble Stands stems as much from the former Australian captain’s legendary 35 years behind the lip microphone for Packer’s Nine Network. 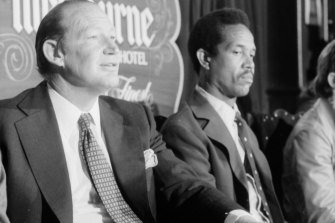 While Australia’s first innings began soundly in Sydney before finding tougher going against James Anderson and Mark Wood in the evening session, a couple of events in the region provided a signal reminder of the degree to which Packer’s thinking still dominates the landscape, some 16 years after his death.

Neither Bangladesh nor Zimbabwe have ever added to the Test matches they played in Australia in 2003, when Packer still called most of the shots. The Bangladesh matches, in the tropical regions in the middle of the year, were part of a CA attempt to play some less commercially attractive teams out-of-season.

When the Zimbabwe matches followed in October the same year, marked by Matthew Hayden’s then world record 380 at the WACA Ground, an irate Packer called the governing body’s then chair Bob Merriman, referring to these matches as “wallpaper”.

“It was the Matthew Hayden 380 that he claimed had cost him $4 million,” Merriman has said. “The match was in the last week of the ratings period and all his good programs weren’t on because of the three-hour time difference.

“And that week he went down the gurgler on ratings like you wouldn’t believe, and he’s out there trying to sell for the next year. I don’t know how he made up the $4 million, but his ratings figures disappeared because nobody was watching Australia versus Zimbabwe, even though Hayden was making 380.”

Similar thinking was to be evident in 2017, when CA quietly dropped a scheduled visit by Bangladesh to Australia for Test matches in August and September of the following year. It is said that CA, having commenced a cost-cutting drive in the wake of their collective bargaining stoush with the players’ union, estimated a cost of $6 million to stage the series towards the pointy end of the football season.

As negotiations for the next rights deal started to warm up, culminating in the $1.18 billion deal with Foxtel and Seven in April 2018, Bangladesh’s promised tour evaporated. The first men’s Test of the next cycle was to be a box office date with India in Adelaide instead of a meeting with Bangladesh in north Queensland. 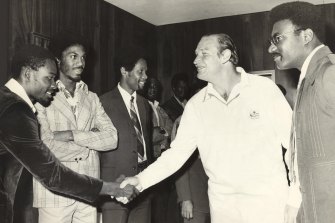 The hesitance to host Bangladesh at home has narrowed CA’s strongest reciprocal agreements with other boards to those of England, India and South Africa – which effectively took over the place of West Indies after the Caribbean side faded from their peak during Packer’s time. The Test Championship has only partly redressed the balance.

Similarly, Packer’s determination to keep the broadcast show on the road was also legendary. Though he never had to contend with COVID-19, nighttime curfews afflicted his broadcasts more than once.

During the World Series Cricket breakaway, one game was carried to a conclusion by slowing down the stadium clock at Waverley Park. The rain rule that left South Africa with the requirement of 22 runs off one ball at the SCG during the 1992 World Cup semi-final was likewise devised primarily to ensure a result by the evening cut-off time.

So it is that, despite a surfeit of COVID cases in the Big Bash League and the Ashes, CA has forged on grimly, working at the extreme fringes of the summer’s protocols in order to do so. Cricket has been kept on TV, by day and night, whatever the difficulty.

But even here, Packer’s worries became predictions. Games now stretch well beyond three hours in length, having once been devised to conclude in little more than two, largely to allow more space for those all-important advertising slots.

At the time of Packer’s death, Merriman’s successor, Creagh O’Connor stated that only Sir Donald Bradman could rival his influence on modern cricket.

In January 2022, the truth is that Packer’s commerce-minded shadow stretches as vastly over Australian cricket as his light towers do over the SCG.