England are into the Women’s T20 World Cup semi-finals after a 46-run thrashing of West Indies in their final group game in Sydney.

Natalie Sciver once again starred with the bat, making 57 from 56 balls as England posted 143-5 from their 20 overs.

In response, West Indies lost three wickets for one run and had injured captain Stafanie Taylor taken off on a stretcher as they slumped to 42-4.

Lee-Ann Kirby hit 20 from 15 balls – and was dropped twice – to give West Indies some hope, but they could only reach 97-9, with Taylor unable to return to the crease despite 17 balls remaining.

But they were ultimately well beaten by a determined England.

Heather Knight’s side join South Africa and India in the knockout stages, with the winner of Monday’s match between Australia and New Zealand taking the final spot.

A rejigged batting order did not quite pay off for England at Sydney Showground with Tammy Beaumont, promoted to open, trapped lbw by the fourth ball of their innings.

However, Amy Jones impressed at the back end of the innings, striking 23 from 13 balls, to help England towards a defendable total.

Crucially for England, their spin bowling impressed once again with Mady Villiers, recalled in place of Lauren Winfield, taking a superb caught and bowled, while Sophie Ecclestone (3-7) and Sarah Glenn (2-16) shone again.

While shuffling Beaumont up the order did not work straight away for England, Jones seemed more settled as she came in at six.

With the platform built by Sciver, who was again outstanding in rotating the strike and unleashing six fours around the ground, Jones could hit out as the field spread.

Her three fours came from powerful drives through mid-wicket and she was able to help England plunder 36 runs from the final three overs.

Captain Heather Knight continued her good form, rotating the strike well in a 39-run partnership with Sciver, but she left the field for the final few overs of the West Indies’ innings with an apparent niggle.

While there are still concerns over England’s top-order batting, Sciver’s form and a rejuvenated Jones will bode well for their upcoming semi-final. 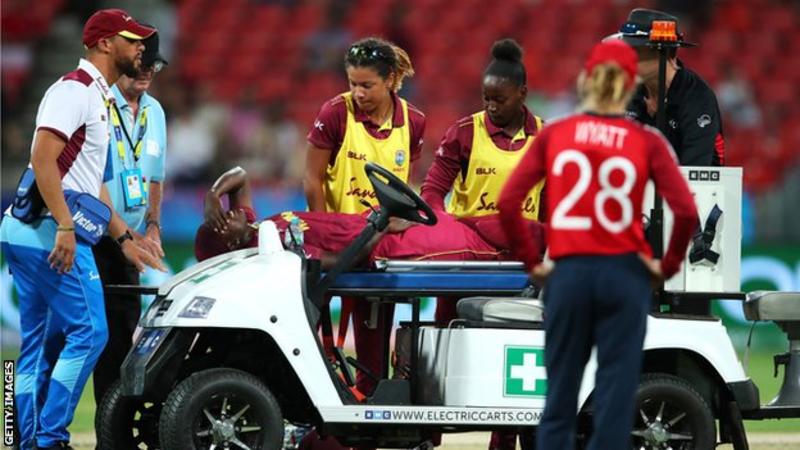 West Indies have a good record against England – prior to this match, they had won six of their eight T20s against them – but this is not the side that marched to the title in 2016.

Their bowling has been the only bright spot, with returning seamer Shakera Selman impressing with 1-23, and their pace bowlers keeping mostly tight lines.

The batting, however, is devoid of confidence and rhythm. Kirby arrived in Australia having not played a T20 international for 12 years. She opened in the first two matches and then was dropped down to seven in Sydney, with Deandra Dottin opening.

Dottin fell cheaply, slicing Ecclestone low to Sciver at short mid-wicket, but even as captain Taylor started to hit out, it always felt as though a collapse was on the cards.

After Taylor was taken off, Hayley Matthews was bowled by the next ball, before a superb one-handed catch from Villiers in her follow-through accounted for Shemaine Campbelle.

Wickets fell quickly and cheaply, batters undone by the lack of pace in the pitch and the unerring accuracy of England’s spinners, and it was an underwhelming end.

Tougher tests await England – but this was a much-improved performance from their tournament opener against South Africa.

‘We’re on to better things’ – reaction

England batter Nat Sciver on BBC Test Match Special: “I’ve been playing to my strengths, I’ve had a run of games and I’ve just kept it going from being here in Australia over the winter.

“Losing the first game wasn’t ideal but we didn’t win the first game in the 2017 World Cup in England. We’re in the semi-final and on to better things.

“Whoever we play in the semi-final is going to be a big game and hopefully we can perform when the pressure is on.”

England captain Heather Knight: “We knew it was going to be a slow wicket so we knew we would have to be clever with the bat and ball. We kept it simple.

“We’ll have to sit down and have a look at what our best line-up is for the semi-final now.”

West Indies spinner Anisa Mohammed: “England just got away from us in the last five overs, and with the bat we need to work on rotating the strike.

“We are really disappointed, we really wanted to go through to the semi-finals but it wasn’t to be this year.”