“There is no limit to what we, as women, can accomplish.”

Meg Lanning’s side were not just expected to win the T20 World Cup; they were meant to steamroller their way to glory.

They had reached the final five times in the previous six tournaments, losing only once. They had demolished England in the recent Women’s Ashes. They are, by any measure, the best in the world.

And then they lost their opening game to India and suddenly everyone was wondering. Is this the moment Australia’s dominance starts to lessen?

Really? We were silly to think it would turn out any other way than Australia winning by 85 runs in front of 86,174 fans, the game sandwiched by two Katy Perry concerts.

A team of superstars

Before every Women’s T20 World Cup match, no matter who was playing, ‘C’mon Aussie, C’mon’ was blasted out to the crowd.

The original version was the soundtrack to World Series Cricket in 1978, but it was rewritten for the Australian women as they embarked on the biggest home summer of their careers.

Australia have always had match-winners, but never to this extent. Every player in the line-up offers something so, should one fail, the other is there to pick them up.

Alyssa Healy was not in great form arriving into the tournament, so fellow opener Beth Mooney picked up the mantle. Mooney’s consistency, with three half-centuries across the World Cup, meant the pressure was not building on Healy.

Then, when Healy got the opportunity to let loose in the final, it paid off in impressive – and devastating – fashion.

Midway through the tournament, Australia lost star all-rounder Ellyse Perry to injury. A few years ago, that would have had a huge impact on their tournament, potentially stopping their run to the final.

But now Australia have Jess Jonassen as a spin bowling all-rounder. There’s Nicola Carey, who can bowl with pace and whack a few at the end of the innings, similar to Gardner.

Megan Schutt, who has developed so much over the past few years, leads the attack with ease. Perry’s loss was felt, but not as keenly as it once would have been.

At the heart of the Australia team is Lanning, a captain who leads by example with the bat and is never flustered when it comes to a tight match.

“I don’t train and put in all the time and effort to be a good player,” said Lanning in a recent interview. “I want to be the best player.”

There were nearly 90,000 people inside the MCG on Sunday. India acted as though the eyes of every single person was trained on them; they were nervous, sloppy, and never recovered from the stuttering start that included 16-year-old Shafali Verma dropping Healy – then watching the opener smash five sixes in her 78 off 54 balls.

From the moment they walked out for the anthems – huge smiles, arm in arm, Lanning bending down low so she could chat to her mascot – Australia drank in the pressure and savoured the epic occasion.

Every time Healy hit a boundary, the noise would grow louder and smiles bigger. It was ruthless batting, she and Mooney barely drawing breath as they bulldozered their way through India’s bowlers.

After Mooney and Nicola Carey walked off the field, having helped Australia to 184-4, they were called over by coach Matthew Mott. Before they began their fielding drills, their bowling practice, Mott pulled the players together in a huddle.

Maybe he was reminding them that just because India already looked beaten, they were not to let up. They still had to take the attack to them.

And they did. Every player dived to stop boundaries; Healy was superb behind the stumps, the India batters barely allowed to move. They did not put a single catch down, whereas India shelled two in the first two overs.

The entire night had a surreal feel to it. Not Australia’s ruthlessness – that was to be expected of a team that has won almost everything.

But the last act at the MCG saw pop star Katy Perry bring the players onto stage, trophy and all. The players could not stop smiling as she and a full crowd sang to them.

The most impressive thing about this Australia side is that they are ruthless in a way that other women’s teams – save the USA women’s football team – are not.

They know they are good. They are the best in the world, they are the opponents everyone fears, and they revel in it.

And so does Australia – they love a champion down under; and they’ve got the very best in Lanning and her team.

Women’s cricket had never seen anything like this before. For the organisers and the Australia team, it really was mission accomplished. 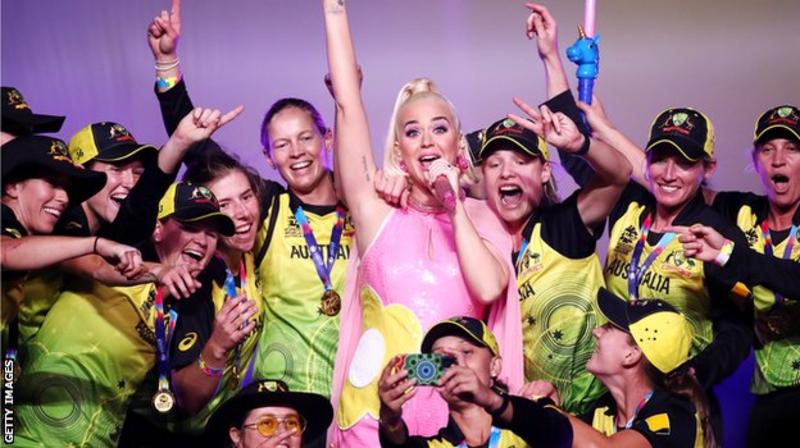