These are defining days for Australia’s white ball captain Aaron Finch, and not only for what his team can achieve this week.

Victory over Pakistan would vault Australia into a first T20 World Cup final in more than a decade, with the chance to lift the only ICC trophy to elude one of the game’s historical power nations. 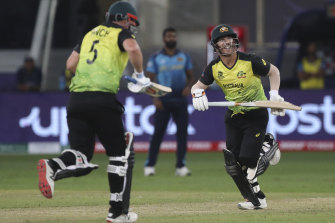 Aaron Finch and David Warner, among others, can become multiple World Cup winners this week.Credit:AP

But it would also shore up the right of a seasoned combination to stay together for a World Cup on home soil next year, and ease the pressure for renewal to Australia’s T20 setup after a series of underwhelming results with weaker sides leading into the event.

For Finch, both this tournament and next year’s are junctures at which he and other members of his generation – David Warner and Mitchell Starc to name two – can mark themselves as multiple World Cup winners, a feat that has eluded Australian teams since they completed a hat-trick of 50-over titles in 2007. Back then, the Cricket Australia trophy cabinet was bursting, but not so much now, with only the 2015 title since.

As a captain should, Finch thought beyond the here and now when asked about how his legacy as a leader was evolving. He noted the vast array of players tried on T20 tours this year prior to the World Cup, arguing that defeats to New Zealand, the West Indies, and Bangladesh were secondary to the experience gleaned by the generation anointed to replace his own.

“One thing I’m really proud of is that we’ve started to uncover a little bit more depth in T20 cricket in Australia,” he said. “I think in the long run, over the next two or three years, this period will help us uncover more talent and depth. Although the results previous to this World Cup hadn’t gone our way, there was so much learning we got out of that.” 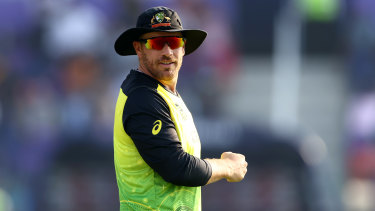 Australia have won 27 games and lost 25 under Finch’s T20 captaincy, which began in 2014 but had a hiatus in 2016 when Steve Smith was made all-format skipper. Against Pakistan, his record is four wins and five defeats.

Promisingly for Finch, he boasts an enviable batting record against Pakistan, striking at 151.85 and improving his record against them with every encounter over the past six years. Another strong start by the Australian top order will not only work wonders for Finch, but suit the way the team is arrayed, with Glenn Maxwell poised to enter the contest at the end of the initial powerplay.

“That was the plan from the start of the tournament to be honest,” Finch said. “The only change with the England game is we went in with six specialist batters, instead of the seven. That left us with a decision to make, whether Maxy went in in the Powerplay, or we held him back. We felt to win that game, you’ve got to throw all your aces up front when you’ve only got six batters.

“It didn’t work that day, but that’s ok, we’ve learned our lesson and we’re still here in a semi-final to push on. That’s [coming in after the powerplay] a pretty common theme with Maxy’s role in our team, in other teams he’s played, and he’s someone who plays spin really well through the middle, he can be really dominant with five fielders out from ball one.”

Australia’s emphasis on pace has been pronounced in this tournament, bowling more overs of speed than any other nation – though New Zealand have come close. “You can look at stats and deep dive into whether you should be bowling spin or quicks in the Powerplay,” Finch said.

“Sometimes it just comes down to executing your best ball on the day over and over. For us that’s been Starc and Hazlewood’s first couple of overs, generally, and Cummo coming in on the back of that.”

With another eye on the future, Finch acknowledged that this may be the last tournament in which Australia are mentored by a single head coach in Justin Langer, as COVID-19 catch-up series make it increasingly more difficult for one central figure to manage it all.

”There will probably be a bit of a crossover of formats again, like we saw what was planned with South Africa and New Zealand,” Finch said.

“There might be some questions once those tours start to become really condensed and back up with each other, that support staff, players, coaches, team managers, physios, everyone, will need a bit of a chop out and to be able to get out of these bubbles we’re in at the moment. I think over the next two or three months that’ll be a little bit clearer.”

Should Australia prevail over Pakistan, and then in the final, Finch will join an even more select group of Cup-winning captains: Allan Border, Steve Waugh, Ricky Ponting and Michael Clarke.