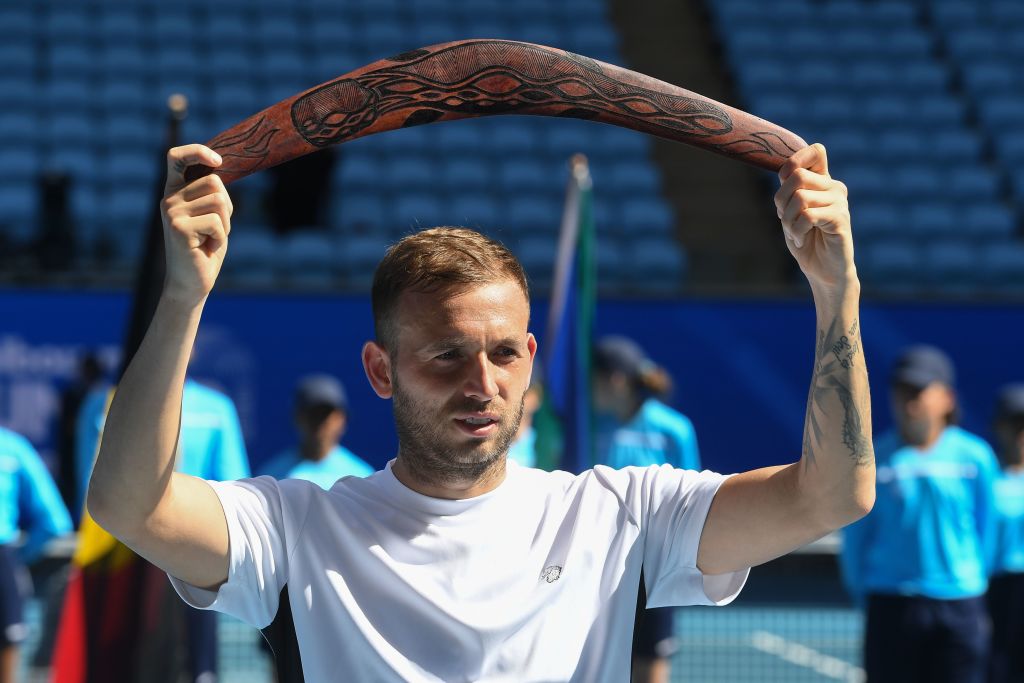 There is little time to celebrate for Evans, 30. He has to gear up for his first round match at the Australian Open, against compatriot Cameron Norrie, on Tuesday.

Evans is now set for a career-high ranking of around world No. 26 and he ticked off one of the goals that had eluded him during his career, although his main focus is having a good run at the upcoming Grand Slam.

‘I mean, I said to – just before my ban [for testing positive for cocaine in 2017], I said to Hilts [his former coach] that year I wanted to make final,’ said Evans.

‘The goal that year was to win a title, obviously didn’t get a chance and come back and lost in the final.

‘Of course I wanted to win one, but today was just another match, really. I approached it in that way. Yeah, everybody wants to win. It’s a great feeling to win.

‘But you know, it’s a pretty unique situation we’re in where I was warming up today and normally in the final you’re warming up there’s nobody around, but here you just about find a spot to warm up because everyone is getting ready for Australia.

‘So yeah, it was good to be out there and win, but like I said last year, this year I wanted to do well in the bigger events. I didn’t have great Grand Slams last year, albeit a strange year, but my focus is on this week now. I’ve got a tough match against Cam and hopefully get through that one.’

He added: ‘I’m past this week now, and I’ll recover, and I’ll look back and it’s a good achievement after I’ve finished in Australia. But the proper tournament starts tomorrow.

‘I’m not stupid, you know. I’m lucky Stan pulled out [of the quarter-finals], and all respect to Jeremy Chardy, it’s an easier match than Wawrinka. You’ve still got to take your chances and there’s no better practice than matches for me.

‘Listen, I want to do well next week, but delighted with how today went and this week, but it’s over now, and look forward to Tuesday.’

His beaten opponent Auger-Aliassime, the world No. 21, has now lost seven tour-level finals without lifting a trophy.

‘It was, I mean, not good, for my part. It was tough,’ said Auger-Aliassime. ‘I think he played a good match. Credit to him for today. He did what he had to do.

‘He played well. He was aggressive, mixing it up well, and I just didn’t play a good match overall for my part.’

It was a good day for British tennis. Jamie Murray was also a title winner in his first event after re-teaming up with former doubles partner Bruno Soares.

The British-Brazilian pair beat top seeds Juan Sebastian Cabal and Robert Farah 6-3 7-6 (9-7) to win the Great Ocean Road Open and will now turn their attention to winning a second Australian Open together.

‘I think obviously it’s nice to come back somewhere where you’ve won and had success,’ said Murray.

‘I think we – we had three and a half great years together. We obviously know coming back together that if we work hard and have good energy and work together as a team, there’s no reason why we can’t be successful again.

‘I think this week showed that. It gives us a lot of confidence going into the Australian Open next week.’