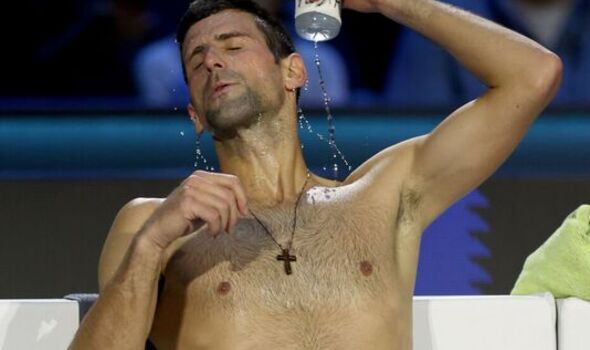 Novak Djokovic ended a turbulent season on a high finishing as world number five after beating Casper Rudd 7-5,6-3 in the ATP Finals. Despite triumphing in the tournament, Djokovic suffered violent tremors during his group match against Daniil Medvedev sparking concerns over his health, but the Serbian says his mental strength can overcome any physical weakness.

Djokovic became the oldest winner of the ATP Finals singles tournament at the age of 35. The Serbian, who won Wimbledon for a seventh time in the summer, was questioned about his health after being seen shaking on court against Medvedev after already having qualified for the semi-final.

“I did struggle with the match with Medvedev,” said Djokovic. “This was the toughest match of the week for me, no doubt. It was not easy to recover and to really be able to play well in the semis in less than 24 hours after that match, that thriller against Medvedev.

“What can I say? I have a great physio. I have a great team. I have routines that work for me very well, I feel like, in terms of recovery. I think most of all it’s what you tell to yourself. We talked about it. I think someone asked me after the Medvedev thriller, Where is the limit? I really feel that limit often times exists only in your mind and your perspective.”

Djokovic was prevented from playing in the Australian and US Open this year due to his anti-vaccine status amid the Covid-19 pandemic. That left the door open for Rafael Nadal to win a record 22nd Grand Slam title with wins at the Australian and French Opens with the Serbian having won one less.

Djokovic has had his ban from entering Australia lifted and the tennis star says he is prepared to push himself beyond any physical weakness in the search for success. He added: “It’s an internal battle with myself because there’s one voice that is always telling you you can’t do it, you’re too tired, this and that, right? The bad guy and the good guy. You try to feed the good guy so he can become louder and stronger than the bad guy. It’s as simple as that.

“In those moments where you have pain, this or that, you don’t feel maybe like standing up in the morning, whatever it is, there has to be something, whatever it is for all of us, that gets us up from the bed. It’s the heart, it’s the mind, whatever the life force or the fuel is for you.

“For me it’s still the hunger that someone asked me about. It’s love for the game, no doubt. Passion. I love the game. I said it already. Of course, making history of the tennis sport, which of course is my favourite sport, the sport that has given me so much privileges in life and benefits.”