If a condemned person can request a final meal, it seems only fitting that Novak Djokovic spent what could have been his last free moments in Australia hitting tennis balls on his favourite court.

There he was in a green Lacoste T-shirt, exchanging forehands under a brilliant, early afternoon sun with Argentine Frederico Coria, laughing and joking in Spanish like a man at ease with his place atop the tennis world. 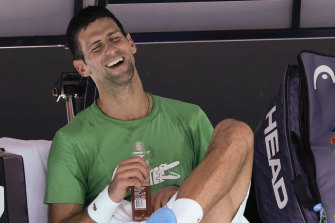 Novak Djokovic shares a laugh during a break on the Rod Laver Arena on Thursday. Credit:Mark Baker

It felt like a star actor rehearsing his lines in a burning theatre. But then, what else is a tennis player at the centre of a spiralling global sport and political scandal to do?

The only things that still make sense in Djokovic’s world are the rhythms of the baseline and the regime required to keep doing what he has been doing for what, until the pandemic hit, must have felt like an endless summer.

Everything else is a discombobulated mess.

Another day came and went with no announcement by Immigration Minister Alex Hawke on whether he will revoke Djokovic’s visa and end his involvement in next week’s Australian Open. With each day, the walls are closing in on a sportsman whose opposition to vaccination has morphed into a career-threatening condition.

Djokovic faces not only possible deportation from Australia, but sanction by his beloved Serbia and an investigation into travel discrepancies by police and immigration authorities in his adopted home of Spain, where he lives with his family in a recently purchased $15.7 million villa on the Mediterranean coast.

He is accused of either faking a COVID infection to acquire a medical exemption through a contentious loophole or, as an alternative, treating his responsibility to isolate until he was virus-free with such reckless disdain that Serbian Prime Minister Ana Brnabic felt compelled to publicly censure one of her republic’s most popular figures.

“It is important for our citizens to know that we love Novak, we are grateful to him for all he is doing and what he has done for the republic of Serbia, but there are some standards that have to be met,” she told the BBC.

Djokovic’s ambition to become the first man to win 10 Australian Opens and 21 grand slam single titles could still be over in the flick of an email from Mr Hawke, whose discretion to cancel Djokovic’s visa is as wide as the Serbian’s trophy cabinet.

From here, things won’t get any easier for a player who, unless he finally agrees to get the jab, will face similar problems travelling through parts of the US and Europe to ply his trade.

Like Djokovic, Australian Open chief executive Craig Tiley is trying to stick to the familiarity of his pre-tournament routine. On Thursday, as expectation heightened that Mr Hawke would pull the trigger and force Djokovic back into detention, there was a surreal quality to it all.

Shortly after 3pm, the scheduled time for the official draw of the men’s and women’s competitions, a disembodied voice announced over the Tennis Australia PA system that it had been postponed until further notice. The timing – 45 minutes before Prime Minister Scott Morrison was due to hold a press conference after national cabinet – suggested that serious things were in motion.

Instead, the PM said nothing new about Djokovic’s situation and at about 4.30pm, during the rescheduled draw, tournament referee Wayne McEwen dutifully slotted the world No.1’s name into the gap reserved for the top seed. Senior tournament sources later said the delay was due to technical problems rather than uncertainty surrounding Djokovic.

Djokovic will play fellow Serb Miomir Kecmanovic in the first round unless he is otherwise engaged. If he is locked in further litigation or on a plane home, his place will be taken by the current fifth seed, Russia’s Andrey Rublev and several other matches will be affected according to a preset formula.

What this means for the tournament and the city is harder to say.

One of the advertising slogans for this year’s Australian Open is “Melbourne is Open.” Victorian Minister for Tourism, Sport and Major Events Martin Pakula announced on Thursday that half the seats would remain closed to spectators and everyone in the stands would need to wear a mask.

The most telling part of this announcement was that no tickets would need to be refunded as less than half had been pre-sold. Just when Melbourne is desperate for a big bang event to get people back into restaurants and onto our city streets, we are reluctant to rejoin the crowd.

The attitude of most Australians towards Djokovic was best captured by the “lying arsehole” newsdesk discussion between Seven anchors Mike Amor and Rebecca Maddern which, although never intended for broadcast, earthily articulated what so many are thinking.

Kicking Djokovic out on the eve of the tournament will feel good to anyone who shares their opinion of Djokovic. It will also further diminish an event which, like the rest of us, survived the pandemic but is still searching for a way out.