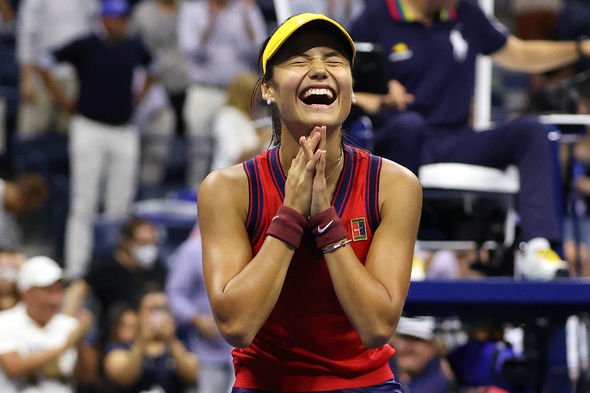 Emma Raducanu moved to shift the pressure onto her US Open final opponent as she prepares to face Leylah Fernandez in one of the biggest matches in British tennis in decades. Raducanu will face fellow unseeded teenager Leylah Fernandez on Saturday after recording another emphatic straight-sets victory over Maria Sakkari.

Raducanu is yet to drop a set across nine matches at the tournament — three in qualifying and six in the main draw  — and was a comfortable 6-1 6-4 victor over the Greek.

Speaking in her on-court interview after the match, she played down expectations ahead of the final when asked how she plans to deal with the pressure against Fernandez.

JUST IN: Emma Raducanu reaches US Open final with victory over Maria Sakkari

Fernandez has reached the final in stunning fashion herself, knocking out the second, third and fifth seeds, as well as three-time Grand Slam champion Angelique Kerber.

All four of those matches went the distance, with the victory over world No.2 Aryna Sabalenka preceding the match between Raducanu and Sakkari.

Raducanu said witnessing another rookie make it into the final had no bearing on her performance on Arthur Ashe Stadium.

Raducanu has been nerveless throughout her time in New York and she served the match out comfortably at 5-4 up in the second set, despite seeing numerous break point opportunities come and go earlier in the set.

Before match point at 40-15, Raducanu glanced over towards Tim Henman — a semi-finalist in the men’s draw here in 2004 — for assurance ahead of what turned out to be the final point of the match.

“Tim is such a big inspiration,” Raducanu explained. “He’s been helping me, telling me to treat one point at a time and in moments like this you definitely can’t get ahead of yourself and you really just need to stay present. I’m really grateful for Tim and everything he’s done for British tennis and for me.”

Addressing her time in New York and the crowd, she added:  “The time here in New York has gone so fast, I’ve just been taking care of each day and before you know it three weeks later I’m in the final and I can’t believe it, thanks to everyone.

“Honestly since I’ve been here I’ve had unbelivebale support in New York. You have made me feel right at home. Playing under the lights on Arthur Ashe in New York is one of the most iconic things in tennis.”