Hewitt’s record rise to the top 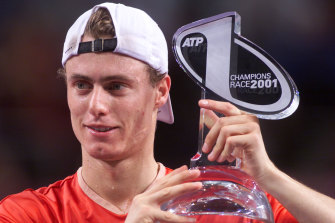 Lleyton Hewitt holding the No.1 trophy after beating Pat Rafter in the Masters Cup.Credit:Dallas Kilponen

With a final forehand winner, Lleyton Hewitt last night became the youngest year-end No.1 in 29 years of rankings history, and Australia’s first.

With two days to play in the Tennis Masters Cup, Hewitt has already experienced his biggest win.

Ready to embrace him across the net was Pat Rafter, whose breakthrough 1997 United States Open victory helped to inspire Australia’s tennis revival. Hewitt has grasped the baton, just as he last night seized a nervous 7-5, 6-2 victory with his sixth match point to take an unassailable 12-point lead over Gustavo Kuerten in the ATP Champions Race. 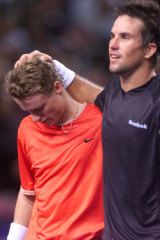 Lleyton Hewitt being congratulated by Pat Rafter after his win to make him No 1.Credit:Dallas Kilponen

None of today’s three other semi-finalists can overtake him, as Kuerten lost all three of his round-robin matches, and fellow contender Andre Agassi went only one win better. Had Hewitt faltered last night, he would still have woken to a second chance in today’s semi-final against Juan Carlos Ferrero. Instead, his alarm clock will signal the dawn of a new No.1.

“It’s an unbelievable feeling,” Hewitt said after raising the Champions Race trophy. He had not wanted to play Rafter, one of his closest friends on the tour, and later paid tribute to the role the Queenslander had played in his graduation. “To do it at the age of 20, and to do it in Australia, you couldn’t have written a better dream,” he said.

Hewitt has often been compared to Jimmy Connors, and with this success the South Australian erased one of Connors’ achievements from the record books. Hewitt is 20 years 10 months old. Connors was 22 years three months at the end of his stellar 1974 season.

Of course, records are nothing new for Hewitt. As a 15-year-old Hewitt was the youngest qualifier in Australian Open history, and in 1998 he became the lowest-ranked tournament winner in men’s tennis when, ranked 550th, he won the Adelaide hardcourt title.

John Newcombe and Rafter have managed the climb to No.1, Rafter’s stay lasting just a week in 1999, but they are the only Australians who have come close to finishing a season at the top of the tree. Newcombe finished second in 1973-74, and Rafter in 1997.

Last night, Rafter enjoyed at least as much support from a crowd of 16,800, but, having already failed to qualify for the semi-finals, had far less at stake.

Even a fit Rafter struggles to beat Hewitt; with the Rafter serve compromised by inflammation of his heavily strapped arm, his little Davis Cup buddy was never going to lose this one.

Which was a shame in some ways, because it was probably Rafter’s final tournament match in Australia, with only the Davis Cup final to come. In that context, the Queenslander’s performance was highly encouraging, and he will spend the next two weeks in the treatment room and on the practice court.

On a night of celebration, only Yevgeny Kafelnikov offered a note of caution, the former No.1 warning that although climbing the mountain is hard enough, staying there is far tougher still.

“Look at what happened with (Michael) Chang,” Kafelnikov said. “All of a sudden he was on top and looks to me he ran out of steam at age of 25, 26. That could be a question, because you are doing a lot of running and you are using so much energy, and who knows how it is going to be affecting you in the future?”

The Brazilian left the court immediately after his 6-2, 4-6, 6-3 loss to the Russian, head bowed, unsure whether he would be fit enough to return in January for the Australian Open, but adamant that 2001 had been a great year.

The unbeaten Kafelnikov and Sebastien Grosjean meet today in one semi-final of the Masters, before Hewitt plays Ferrero.