London: As each day passes at Wimbledon, the latest quip from Nick Kyrgios or his behaviour on court has provided a steady stream of material for water-cooler discussion at the All England club.

Brits may have been busy soaking up the fortunes of their own healthy contingent in the ladies’ and gentlemen’s singles draws – Cameron Norrie’s surge into the semis sent national pride soaring – but the travails of the never boring Kyrgios have been impossible to ignore.

Verbal jousting with journalists, separate fines for an audible obscenity and spitting towards a fan, antagonising Greek opponent Stefanos Tsitsipas, a sublime and well-behaved second-round match finished in less than 90 minutes; his tournament so far has had a bit of everything.

But as strong and excited crowds flocked into the SW19 precinct on Tuesday ahead of quarter-final action, the news emanating from Down Under that Kyrgios will face court in Canberra next month, accused of assaulting his former girlfriend, was jolting.

The 27-year-old’s quip to a British reporter the previous day that “any publicity is good publicity” – in a snappy verbal exchange about breaching Wimbledon’s all-white dress code – was suddenly seen in a whole new light.

Wimbledon’s organisers didn’t immediately comment on the circumstances for Kyrgios but, by day’s end, it was confirmed they were in contact with his team and there was no doubt he would play his quarter-final against Cristian Garin, pencilled in for court one, on Wednesday. 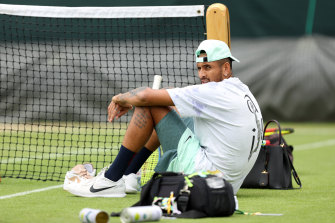 Nick Kyrgios on the practice court at Wimbledon.Credit:Getty Images

The show would indeed go on.

Having been probed, too, on Monday about whether he bemoans the controversy and attention that inevitably follows him, Kyrgios said: “I don’t moan. I love it. More attention for me. What’s that saying? Any publicity is good publicity, right?”

That seemingly wasn’t the case on Tuesday as a sizeable media pack had Kyrgios in their sights as he turned up for practice just as the news of his pending court appearance was breaking.

By various reports, Kyrgios didn’t seem to be enjoying the latest publicity as he cut a dejected figure after a practise session at SW19 on Tuesday, and later moving to another court out of sight.

“I feel like I’m in The Last Dance,” he was heard to say to his trainer, according to onlookers, a reference to the super-popular Netflix series about Michael Jordan and the Chicago Bulls.

The irony is not lost on some tennis followers, for there have been Netflix cameras on the circuit this year, capturing plenty of behind-the-scenes moments of some of the sport’s stars.

Tracking the comings and goings of Nick Kyrgios, saga after saga, drama after drama, would generate plenty of material for multiple episodes.

With Kyrgios summoned to appear at the Australia Capital Territory Magistrates’ Court in early August on an allegation of common assault against former girlfriend Chiara Passari, his lawyers were quick to send an important message when the news was first reported by The Canberra Times: “The nature of the allegation is serious, and Mr Kyrgios takes the allegation very seriously.”

Later, his legal representatives took issue with media reporting that stated that their client had been “charged”.

Pierre Johannessen, of Johannessen Legal, said Kyrgios was committed to addressing “any and all allegations”.

“Until the court formally accepts the prosecution will be proceeding with a charge, and that the charge before the court is to be applied to the person summoned to appear, it may be misleading to the public to describe the summons in any other manner than a formal direction to appear to face allegations,” Johannessen said.

On Wednesday night (AEST) at Wimbledon, Kyrgios will front up, win or lose, for the customary post-match media conference after playing Garin.

He’ll have made the semis or not by then – a level at the majors no Australian man has managed since Lleyton Hewitt in 2005 – so expect Kyrgios to be typically forthright.

But on matters relating to court dates instead of plays on court, expect him to say little.

Watch all the action from Wimbledon ad-free, live & on demand on Stan Sport, with Centre Court matches streaming in 4K UHD. Coverage of select matches commences on 9GEM from 9:30pm AEST each night.