New York: Barbora Krejcikova survived a Garbine Muguruza fight back and late injury issue to claim a 6-3 7-6(4) win and move into the quarter-finals of the US Open on Sunday, while her Spanish opponent’s run at Flushing Meadows ended at a familiar roadblock.

Playing in the US Open main draw for the first time after failing to qualify on five occasions, Czech Krejcikova has suddenly found form on the New York hardcourts, at times looking as comfortable as she did earlier this year on clay winning the French Open.

However, Krejcikova, who called a medical time out late in the second set, looked in distress after the match and was helped off the court by medical staff.

For Muguruza, it was a familiar end to her Flushing Meadows campaign.

The Spaniard has won the French Open and Wimbledon, reached the final in Australia but has failed to reach the quarter-finals at the US Open.

With the clock ticking towards midnight in New York, Muguruza sleepwalked through the early games as Krejcikova surged to a 3-0 lead. 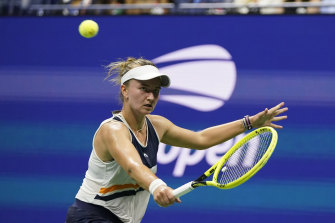 The Spaniard eventually emerged from her slumber but Krejcikova was already in full stride, sweeping through seven straight games to take the opening set and a 4-0 lead in the second at Arthur Ashe Stadium.

Muguruza mounted a determined comeback, piling on the pressure to win five games on the trot to move ahead 5-4.

With the score at 6-5 and preparing to serve to force a tie-break, Krejcikova called a medical timeout and left the court clutching her abdomen.

After returning to the court, the Czech held serve to love to force the tie-break, which she easily won 7-4.