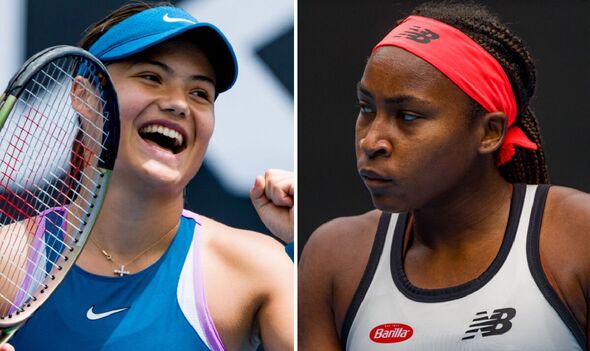 Emma Raducanu will be “back on the map again” by beating Coco Gauff at the Australian Open, John McEnroe has claimed. The British No 1 has not got beyond the second round in her four Grand Slams since her 2021 US Open triumph and is now down to world No 77.

And she has never beaten a top-ten player before facing world No 7 Gauff for the first time. “It’s been hard to watch her difficulties,” said McEnroe.

“But she’s playing someone who’s gone at a slower pace and matured more gradually – Gauff is only 18 but has been on the tour for years. It’s a great second-round match-up and I think it’s going to be the first time in a while where Emma can really let loose and play more free.

“It’s going to be interesting to see what happens there. I think Coco is in the better position right now to make a deep run and I think it’s going to be soon that she’s going to win a major event in the next year or two at the most. To me she goes in as a heavy favourite.

“She seems to be playing better and better and serving more consistently than she has done. I would say that it’s a match she should win, but a match that could put Raducanu back on the map again, which would be good for her.” The two young stars were full of mutual respect before their meeting after experiencing different preparations at the ASB Classic in Auckland.

MUST READ: Australian Open bans all Russian flags while play stopped for hours

Raducanu, 20, had to withdraw after twisting her ankle in the second round and was in a race against time to get fit for the first Grand Slam of the season. By contrast, the American, 18, won her third WTA title to arrive in Melbourne among the favourites in a women’s field decimated by injuries.

“It will probably be the first time in a couple of years where Emma Raducanu won’t be feeling the type of pressure she’s been feeling since she won the US Open,” former world No 1 McEnroe told Eurosport. “So that’s probably a good thing to allow her to be more free and do her thing, because to me she’s the type of player, the type of person and the type of talent that we could use in the top 10.”

The three-time Wimbledon champion also claimed Jack Draper has top-ten potential after the British No 3 lost to Rafa Nadal when he suffered from cramp. Draper has climbed from world No 265 at the start of 2022 to world No.38. And McEnroe said: “He’s made amazing progress,” said McEnroe.

“But you see that level that you have to get to in order to compete with the all-time greats in a best-of-five-set match, that’s the difference. To me he’s one of the most dangerous players outside the top 10 if you were playing two out of three sets, but when you have to take it the best of five, that’s another thing altogether.

“I think he’d be a breath of fresh air and would be great for our sport if he broke through because he’s certainly got top-10 potential, he’s crafty, he knows what he’s doing, he’s got a good feel for the game. This conditioning part, you don’t know how much of it is actual conditioning because, from what I’ve been hearing, he’s been working extremely hard to try to get himself fit, because this isn’t the first time this has happened with him, so this is an issue.

“But some players that have gone on to great careers have had cramping issues early on. I had heard he had been sick for a couple of weeks, so that maybe contributed to it. He did a lot of good things, but at the end of the day, the body gave out on him. He has to figure out a way to deal with that.

“He’s not the only guy. Holger Rune for example, who’s going to win majors, has had issues with that, so you can go down the list. Hopefully he’ll get through this quickly.”