Only a handful of people can say they really know Nick Kyrgios and five of them were sitting in the Australian tennis star’s box at the All England club as he played his way into a Wimbledon semi-final.

Kyrgios sometimes screams at his box to fire himself up but he credits Team Kyrgios with dragging him back from a bad place in 2019. 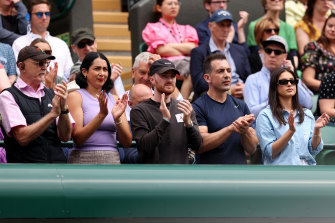 In an Instagram post in February this year, Kyrgios called that time “one of my darkest periods,” citing depression and drug and alcohol abuse, writing: “I was lonely, depressed, negative, abusing alcohol, drugs, pushed away family & friends.”

Kyrgios said he saw three or four different psychologists and sought professional help but it was not pushing his friends and family away that helped him the most.

In his box are father Giorgos, sister Halimah, manager Daniel Horsfall, physiotherapist Will Maher and girlfriend Costeen Hatzi. Then there are his mother Nill and brother Christos, who have stayed at home as Nill awaits a kidney transplant.

“Just embracing that they do love you, I didn’t really understand that, my parents and my family really do care about me,” he told the Turn Up the Talk podcast in May this year.

Notably, Kyrgios doesn’t have a coach or a mind coach in his camp.

“I just look at my box, look at my team, and know that I’ve just got the crowd in the palm of my hand and just go out there and ride the wave,” said Kyrgios.

Kyrgios didn’t think the day would come where he would reach a Wimbledon semi-final. After beating Cristian Garin of Chile 6-4, 6-3, 7-6 in their quarter-final on Wednesday, the Australian tennis star declared, “I thought my ship had sailed”.

“Honestly, I didn’t go about things great earlier in my career and I thought I may have wasted that little window,” he said, later adding,“there was a point where I was almost done with the sport.” 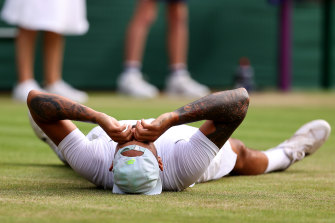 His journey to the biggest match of his career hasn’t been smooth sailing but rather a roller-coaster journey that has included fines for inappropriate on-court behaviour, including swearing and breaking racquets and public feuds with some of the sport’s biggest names.

One night in 2019 even saw him forced out of a pub at 4am before facing Rafael Nadal at the All England club the next day. Unsurprisingly, Nadal won that match.

All of which now pales in comparison to a recent accusation by his former girlfriend Chiara Passari. The 27-year-old tennis player has been summonsed to face court in Australia next month over an allegation of common assault.

Australia started to become familiar with the name Kyrgios back in 2014, when at 19, as a 144th-ranked wildcard, he pulled off a huge upset at Wimbledon and beat then world No.1 Nadal in the fourth round.

This experience, however, brought mounting pressure and attention, which he “didn’t know how to deal with”.

Kyrgios’ public perception has long been a point of contention; loved by fans and detested by critics. Yet while the majority of what the public sees of Kyrgios is while he’s on the court or in press conferences, the tennis star, among others, say he’s someone different off the court.

When Kyrgios went on Australian Ninja Warrior in 2021, host Ben Fordham, who had previously called the tennis star the country’s “biggest tool” on his radio program, said it was an entirely different person he got to know on set.

“He wasn’t a celebrity that flashes a smile and cracks jokes to impress people,” Fordham said. “Some people put on a show in front of the cameras, but they’re different on the other side of it. He wasn’t. He was genuine. Everyone loved Nick.”

Kyrgios said when people see him on the street, they think he’s “absolutely crazy”.

“[But] I’m two completely different people on and off the court. Like, on the court I’m just literally, I can’t explain it, I’m just mental. Really competitive, like sickly obsessed with just putting on a show and winning. But then off the court, I’m very chilled out.

“I’ve been playing the same way since I was 10 years old,” said the 27-year-old player. “People think that I’m trying to act that way out there but anyone who that knows me, any of my close mates and anyone that’s watched me play … [knows] nothing’s really changed.”

In an interview with Sportklub, former world No.1 Novak Djokovic said that whether people like Kyrgios or not, he brings a lot of attention to tennis.

“I see that it is good that he attracts a group of young people who follow him, love and like him because he is different and plays like that – and I don’t think that is bad for our sport,” said Djokovic. “Maybe in some situations his comments on and off the pitch are debatable, but that’s authentic Kyrgios – and I respect that.”

Watch all the action from Wimbledon ad-free, live & on demand on Stan Sport, with Centre Court matches streaming in 4K UHD. Coverage of select matches commences on 9GEM from 9:30pm AEST each night.