Stalwart John Millman produced a great escape to deliver Australia a 2-0 lead over Brazil in their Davis Cup tie.

Millman was staring at defeat when his opponent Thiago Seyboth Wild served for a straight-sets victory at Adelaide’s Memorial Drive.

But the Australian conjured a break, then romped through the tie-breaker without conceding a point en route to a stirring 4-6, 7-6 (7-0), 6-2 triumph. 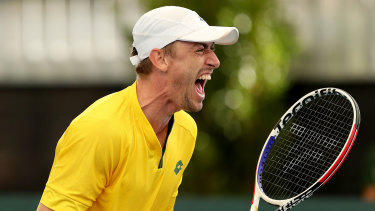 But, with scores at 5-2, play was halted for about 25 minutes as a spectator was treated for a medical emergency.

On resumption, Millman won consecutive games before the imposing Brazilian, whose world ranking of 113 is destined to rise, served out the set.

In the second set, Seyboth Wild broke Millman’s serve in the fifth game and saved two break points in the next game.

At 5-4 and serving for the match, the Brazilian saved two more break points before Millman converted a third to level at 5-5 and turn the tide.

The Australian world No.43 produced a perfect tie-breaker to claim the set.

In the third set, Millman broke Seyboth Wild’s serve in the fifth game, then again two games later, to coolly close out victory.

Earlier, Thompson delivered Australia an opening victory courtesy of late breaks of serve in the 10th game of each set.

‘‘Fortunately every time I have played Davis Cup on day one, I have played the first match so I knew what to expect,’’ Thompson said. ‘‘And I’m really pleased with the result and the performance.’’