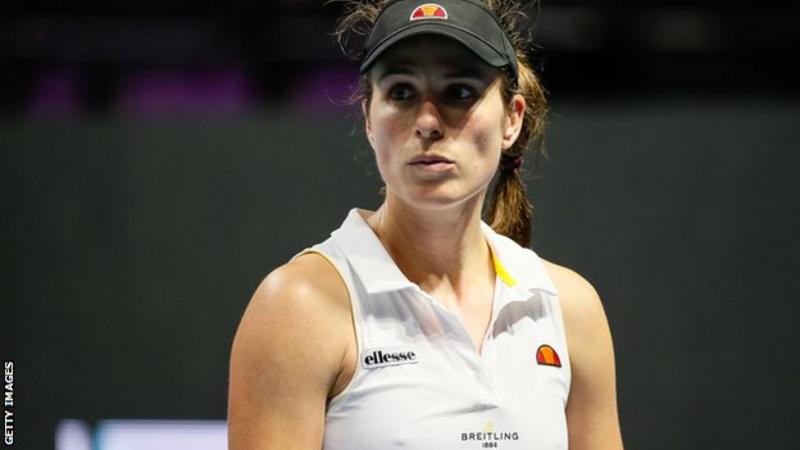 British number one Johanna Konta beat Kim Clijsters 6-3 7-5 at the Monterrey Open to claim her first win of 2020.

Konta failed to convert two early break points, but made the breakthrough in the seventh as she won four straight games to take the first set.

The second set was much tighter and looked set for a tie-break but an unforced error from the 36-year-old Belgian handed Konta the win.

It was only Clijster’s second match since coming out of retirement.

The five-time Grand Slam champion had lost to Spain’s Garbine Muguruza on her WTA return at the Dubai Tennis Championships last month.

Konta, 28, who missed the end of 2019 with a knee injury, had lost in the first round of the Brisbane International, Australian Open and St Petersburg Ladies Trophy this year.

“I feel truly privileged and honoured to share the court with such a champion,” said Konta. “It’s nice to have her back.

“As a young player, I never thought I’d get to play Kim Clijsters in my career.”

Clijsters added: “I’ve been through different generations and played many players throughout my whole career. I’m still at a stage where I want to focus on what I’m doing and how I’m feeling, and also start reading my opponents.

“It’s a process that I have to trust and keep working hard to improve in every match I play. I’d like to take big steps but I have to focus on small steps and improving day by day.”

World number 16 Konta faces Heather Watson’s conqueror Tatjana Maria in the next round.

Former world number one Venus Williams was one of the big names to get knocked out in the first round, beaten in three sets by Slovakia’s Anna Karolina Schmiedlova.