Novak Djokovic’s fight to play in the Australian Open could soon be featured in a Netflix TV show.

The world’s most popular paid-video streaming service is working on a docuseries about professional tennis players that will take viewers behind the scenes of the professional tour, following the blueprint of its popular racing show Formula 1: Drive to Survive. Netflix has secured deals with the ATP and WTA, the governing bodies for tennis, as well as the four Grand Slam tournaments. Box to Box Films, the company that produces Drive to Survive, is also making the tennis series. 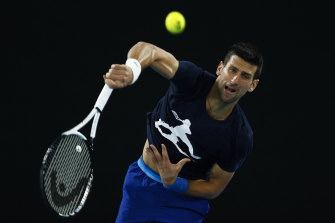 Novak Djokovic during practice for the Australian Open. The star’s fight to play in the tournament could be part of the newly announced Netflix series.Credit:Getty

Filming is already underway at the Australian Open but a release date and title for the documentary is yet to be confirmed.

“The series will also be the first sports program of its kind to provide an equal platform to the men’s and women’s competitors of the sport, in keeping with the equal stage they share throughout the year,” Netflix said.

Earlier this week, Netflix announced it would be teaming up with the PGA tour and golf’s major championships to produce a series documenting the 2022 season.

Collin Morikawa, Brooks Koepka, Dustin Johnson, Jordan Spieth and Sergio Garcia are among a number of high-profile golfers who have committed to participating in the documentary.

After years of expressing no interest in sports, Netflix is starting to offer quite a lot of them. It announced earlier this week a golf docuseries about the PGA Tour. Documentary series about sports have proven to be a big hit with its viewers, who can’t watch any live competitions on the service.

The popularity of Drive to Survive inspired Netflix’s unscripted programming chief, Brandon Riegg, to line up similar shows. The streaming industry leader has repeatedly said it isn’t interested in bidding up for rights to live sports.

“We are excited to continue bolstering our lineup of sports programming with this behind-the-scenes documentary series,” Riegg said in a statement. “Tennis is beloved all over the world, with high-stakes tournaments hopping across continents and athletes hailing from countless countries.”

Riegg noted the service has chosen to invest in sports with global fan bases that feature athletes from many countries. These series are also cost-efficient. Netflix will spend less on multiple seasons of shows about Formula 1 and golf than TV networks spend to broadcast the NFL or NBA for a single year.

The sports have benefited as well. Drive to Survive has attracted new fans to Formula 1, prompting other leagues to try and replicate its success.