Sorry, what? Novak Djokovic says – hold his breath and hope to die – he might not come to the Australian Open in January if he has to prove he has been double jabbed?

And this presents what kind of a problem to the organisers? 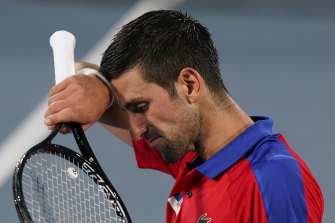 Novak Djokovic has been reluctant to share his COVID-19 vaccination status.Credit:AP

None that I can see.

But let’s hear his words.

“Things being as they are, I still don’t know if I will go to Melbourne,” Djokovic told the Serbian daily Blic. “I will not reveal my status whether I have been vaccinated or not. It is a private matter and an inappropriate inquiry.”

Listen Novak, if I tried to turn up in Serbia in 1975 when small pox was still extant, would the Serbian authorities have been within their rights to refuse me entry?

Because I would be a danger to the Serbian population!

I mean, how hard is this?

And would it have been an “inappropriate inquiry” for them to ask me if I had it?

So what’s different with those basic principles now?

Listen Eddie, I will go with “Nothing”.

Did I get it right?

I got it right!

I repeat: how to deal with Djokovic and all other international tennis players who haven’t had the jab and still want to come to this country, is too easy, Campese. 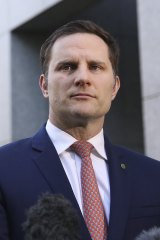 Immigration Minister Alex Hawke said there will be no vaccination exemptions for international tennis stars.Credit:Alex Ellinghausen

There are problems that are particularly upsetting because you are not sure what the proper course of action is. This is not one of them. The Australian government first, and the Australian Open organisers second, need not twist in the wind on this one working out what to do.

The proper response is: “No double jab? OK, seeya.”

This country has made errors, some of them egregious, in our response to COVID-19. But by and large, compared to the errors made by other countries we have done bloody well, most particularly when your key marker is how many people have been lost because of it. From a population of almost 26 million, we have about 1500 deaths. The Americans have 330 million people and have lost a staggering 728,000.

Right now, our path out of the plague – and we have made huge progress in recent months – is twofold: getting a high double-vaccination rate, and restricting the ability of those who are entirely unjabbed to mix with the rest of us. It has, demonstrably, worked.

And Djokovic seriously thinks he should be allowed to waltz on through with his status undeclared, and play, business as usual?

Next time, Eddie, can we have a hard one?

This is, after all, the same Djokovic who, last year, against all health protocols, held his own Plague Incubator International Tournament in Belgrade, which led to Djokovic, his wife, three more players and several members of their entourages testing positive to COVID-19.

He did that, causing international outcry, and yet he still doesn’t get it. He still thinks that because he’s the superstar, he should get to come anyway.

As to the response of Australia’s Immigration Minister Alex Hawke, I can count on the fingers of one finger the things I agree with him on, and this is the one. For his words were perfect.

But what about Djokovic, specifically, he was asked.

No exceptions. No favouritism for the famous.

And if you needed any further reason to believe that Hawke is correct in his approach, you only need to know this, one of his Coalition colleagues in the Nuts, (no sic) Senator Matt Canavan, supports Djokovic.

“We should change the rules,” he told Nine’s Today Show. “Those rules are wrong.”

Uh, no. Those rules have saved countless lives. If we did everything Canavan has proposed – forget lockdowns, open the borders, don’t be too fussed about vaccination status – it would be like the American approach, and that will never work for us.

It will be a pity not to have Djokovic at the Australian Open, but we’ll live. And so will tens of thousands of others who would have died had we not observed those basic precautions.