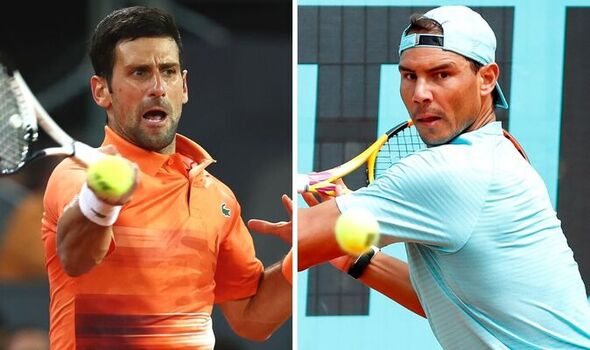 Novak Djokovic has claimed that he and Rafael Nadal are “still going strong” despite admitting things are “changing” with new, young players coming to the forefront. The pair are in the same draw of a tournament for the first time in 11 months and could meet in the semi-final.

Djokovic was left surprised when he was told the Madrid Open marked the first tournament since last year’s French Open that had both himself and his long-time rival Nadal in the draw. After the Serb started his campaign with a 6-3 6-2 win over Gael Monfils, he admitted he thought tennis was “changing” with fewer chances for him and Nadal to play the same tournaments.

Confessing that he was affected by being in the same draw as the Spaniard, he said: Of course, it affects, because he’s my greatest rival of all time. You’re right. I mean, I wasn’t thinking about this, but we have not been in the same draw for a while. You know, things are changing.”

With the likes of Alexander Zverev, Stefanos Tsitsipas and now 18-year-old Carlos Alcaraz occupying the top 10 and winning Masters titles, the world No 1 still thought he and Nadal were right at the top despite the changing landscape of men’s tennis. “We have young players, and we are both trying to do our best to compete for the top spots of the world. I think we are still going strong, so it’s nice to see that,” he added.

JUST IN: Raducanu told she needs to toughen up as concerns raised about future

In the last tournament they both competed in – the French Open – Djokovic defeated the Spaniard in the semi-finals, and Nadal played just two more matches for the rest of the season as he battled a foot injury. He returned this year and won three successive tournaments in Melbourne, the Australian Open and Acapulco before making the Indian Wells final and was again sidelined, this time with a rib injury.

But when Nadal was finally back in action, Djokovic was left unable to compete in Australia or America as a result of his unvaccinated status, and opted to play the Dubai ATP 500 in the same week as Acapulco, meaning they were yet to cross paths. And the 11-time Monte Carlo champion was unable to play while still out with his rib injury, with only Djokovic in the draw there.

Djokovic got his best win in months in his first match against Monfils, marking the first time in six matches – since his Dubai round-of-16 win in February – that he did not drop the opening set. Meanwhile, Nadal faces Djokovic’s compatriot Miomir Kecmanovic on Wednesday in what will be his first match in over a month.

It will be another old rivalry re-ignited for Djokovic in his next match as he faces Andy Murray for the first time in more than five years. The pair once battled each other for Grand Slam titles and the world No 1 spot, and will finally be playing their long-awaited 37th match against one another with their last meeting coming in the Dubai 2017 final.