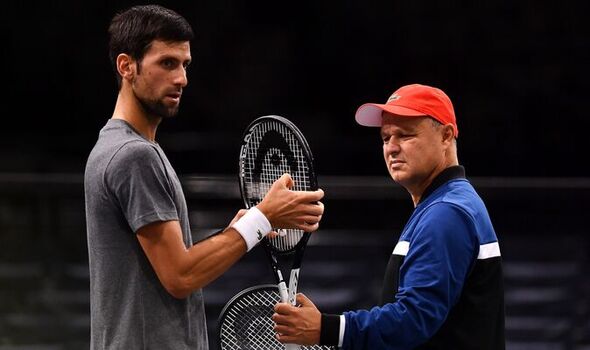 Novak Djokovic’s former coach Marian Vajda already has a new charge just months after ending his long-term partnership with the Serb. Vajda worked with the world No 1 for 15 years and was with him for all but one of Djokovic’s 86 title victories but has now appeared to invest in world No 47 Alex Molcan.

Djokovic and Vajda announced their split earlier this year, reportedly making the decision at the end of the 2021 season but waiting until March to confirm the news. The Serb had worked with Vajda since 2006, barring one brief split from 2017 to 2018, and won all 20 of his Grand Slam titles with the Slovak in his corner.

The 34-year-old is now working solely with Goran Ivanisevic, the former Wimbledon champion who joined his team in 2019 and worked alongside Vajda for the first two years. But it appears that Vajda already has a new player in the form of his young compatriot Alex Molcan, with RTVS sharing a video of the pair’s first training session in Bratislava.

It comes as Djokovic is still hoping to find his best form ahead of his French Open title defence with Vajda no longer in his corner. The 20-time Grand Slam champion will now begin his Madrid Open campaign against Gael Monfils but has been warned over his last stint without Vajda in 2017, where he failed to get past the quarter-finals of a Major and his only title came at the ATP 250 in Eastbourne.

24-year-old Molcan currently sits at No 47 in the world, one spot below his career-high achieved in April, and recently reached his second career final in Morocco where he lost to David Goffin. The Slovak’s first final came against none other than Djokovic himself at the second edition of the Serbia Open last year.

Vajda is expected to work alongside Molcan’s current coach Karol Beck, with the news set to be confirmed in a press conference on Tuesday. His split with Djokovic had not been explained until recently, when the world No 1 brought Vajda and other team members responsible for his success to the court at the Serbia Open at his Novak Tennis Centre in Belgrade to celebrate and thank them.

“I was just tired from the many trips, that’s the reason. I’m happy that we were able to greet each other here properly, having also been able to thank him in front of the people of Belgrade,” the 20-time Major champion’s former coach explained. It is assumed that Vajda will only travel part-time with Molcan, while his current coach Beck will continue to travel with him year-round.

Meanwhile in Vajda’s absence, Djokovic started his season with a 2-2 win-loss record across his first two tournaments, having been left unable to compete much as a result of his unvaccinated status. He also suffered his first back-to-back losses since July, crashing out of the Dubai quarter-finals before losing his opening match in Monte Carlo, but managed to reach the final of the Serbia Open.