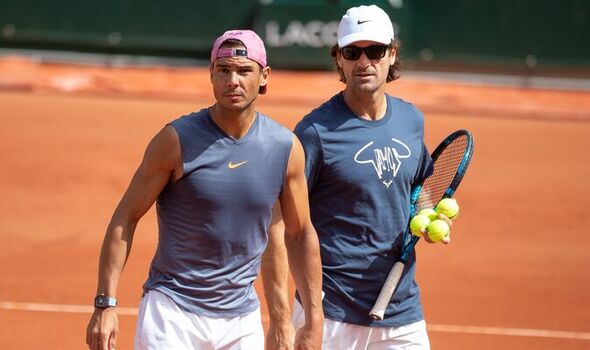 Rafael Nadal’s coach Carlos Moya has slammed claims that the Spaniard won’t find his form in time for the French Open after being sidelined with a rib injury. The world No 4 is making his comeback at the Madrid Open on Wednesday but questions have been raised over whether he will be ready in time to contend for a 14th title in Paris.

Moya hit back at fellow-renowned coach Patrick Mouratogolou after the Frenchman doubted Nadal’s French Open chances following his six-week injury layoff. “He will not arrive at Roland-Garros in his best shape,” the current mentor of Simona Halep was quoted as saying by Eurosport, which prompted the retired former world No 1 to respond.

Reeling off a list of impressive feats from the 35-year-old, Moya wrote: “17 years in a row top 10, Roland Garros’20 with 3 matches in 7 months, Australian Open’22 with 3 matches in 6 months…” Adding a winking emoji as he took a jibe at the coach of Serena Williams, he also called for “a little respect and memory” from Mouratoglou.

Nadal had a six-month injury layoff at the end of 2021 to recover from a chronic foot issue and returned at the start of this season, winning his first 20 matches in a row. It spanned titles in Melbourne, Acapulco and a record 21st Grand Slam at the Australian Open, and came to an end in the Indian Wells final.

JUST IN: Raducanu told she needs to toughen up as concerns raised about future

The Spaniard has not played since but faces Miomir Kecmanovic in his comeback match at the Madrid Open. Mouratoglou had claimed that Nadal rarely arrived at the French Open with few matches under his belt, despite Moya pointing out his success at the postponed 2020 edition of the tournament.

“He is not going to play many games and it is very rare that he arrives at Roland-Garros with so few games. So, this tournament will be a bit unknown to him,” the French coach claimed. “Despite his incredible start to the season, Rafa has always been a player who needed to play a lot. He is not going to arrive in his best form.”

Nadal himself has admitted that he is coming into Madrid undercooked, having only recently returned to the practice court, but said he was “on time” to be ready for the French Open. “I have trained very little, because the rib is very disabling and also very painful. I had two very bad weeks and afterwards it has been very, very disabling,” the world No 4 confessed.

“I haven’t been able to do practically anything, but it’s here, at home, in Madrid. I have three weeks. So I trust that the daily training will help me to get ready. Here [in Madrid, at an altitude of 657 metres] the demand is maximum, but what can be done is going to be done. “The most important thing is to be healthy, but I think that going to Paris I’m on time. Three weeks are enough to get competitive.”