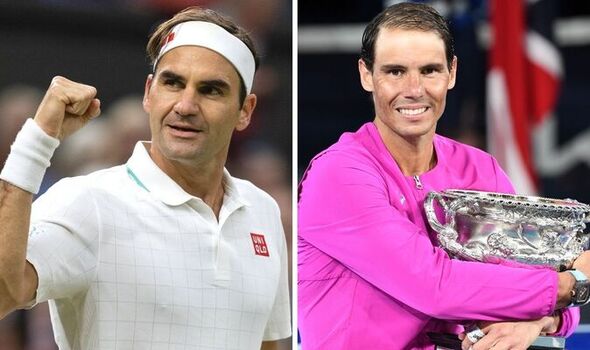 Roger Federer has admitted he is hoping to replicate Rafael Nadal’s heroics when he makes his own eventual comeback from injury, after revealing he spoke with his rival “a lot”. Both Federer and Nadal shut down their 2021 seasons in August and the Spaniard returned in Melbourne this year, where he won a record 21st Grand Slam title at the Australian Open.

Federer has been sidelined since Wimbledon last year, where he suffered a “setback” with his knee injury and underwent a third surgery in the space of 18 months. He is now plotting his comeback and is hoping to emulate his rival Nadal’s heroics after the Spaniard went on a 20 match-winning streak following his own injury comeback in January.

Asked whether he was hoping to do the same as his rival in his own eventual return to competitive tennis, the Swiss star told Caminada: “Absolutely. It’s incredibly inspiring when someone comes back from massive health problems.”

The 20-time Grand Slam champion also revealed that he spoke with the world No 5 often and was happy to see Nadal become the all-time leader in men’s singles Majors after his own difficulties with his chronic foot injury. “Rafa and I talk on the phone from time to time, we talk a lot,” he said.

JUST IN: French Open chief refuses to budge on Nadal after learning ‘lesson’

“I knew he wasn’t doing great, but when he made it anyway, I was really happy for him. The effort is immense. Today, just preparing for a match takes many hours.” And the 40-year-old has been putting in the hours just to get back on the practice court, having returned to an intense level of training in the gym last month.

The current world No 46 explained that he prepares for two and a half hours every day before even stepping onto the court, adding: “As with a car, you have to turn a thousand screws until the engine runs smoothly.” His comeback has already been confirmed for the Laver Cup in London’s O2 Arena from September 23 to 25, where he will be joined by Nadal as part of Team Europe.

Federer’s agent and co-founder of both his TEAM8 management company and the Laver Cup itself, recently confirmed to Standard Sport that the 40-year-old was on track to return in time for the team event. He has also signed up for his home tournament at the Swiss Indoors Basel.

“He’s exactly where he wants to be but unfortunately it takes time. He’s going to play Laver Cup and Swiss Indoors,” Tony Godsick said. “Could he add a tournament before then? Maybe yes but more likely after that. He doesn’t want to commit to anything too soon before having to pull out. But the Laver Cup is enough time that, if all goes well with rehab events, he can get back for.”