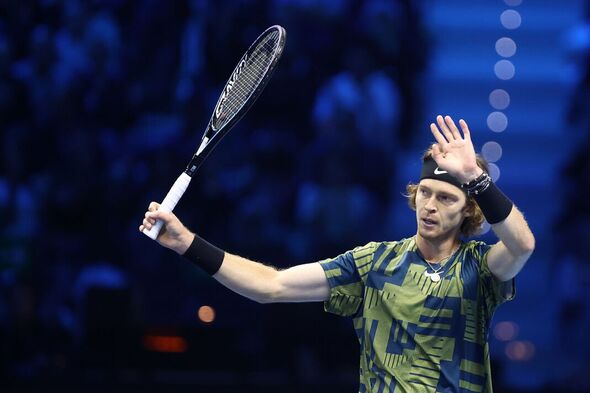 Andrey Rublev vowed that he can become a ‘better person’ as well as a better tennis player in an emotional message to his supporters after the season-ending ATP Finals. Rublev’s campaign ended with a devastating straight sets semi-final defeat to Norwegian star Casper Ruud in Turin.

And the dominant Novak Djokovic ended his unique season in style by overcoming Ruud 7-5 6-3 in Italy to match retired Roger Federer’s record of six ATP Final victories. Russian Rublev defeated Stefanos Tsitsipas to seal his place in the last four of the prestigious event for the first time, but was ruthlessly dismantled by Ruud in a one-sided semi-final clash on Saturday.

The world No.8 did superbly to reach the season finale which showcases the game’s finest eight performers throughout the year. The 25-year-old has enjoyed wins in Marseille, Dubai, Belgrade and Gijon during an encouraging 2022, but cut a crestfallen figure as he held his head in his hands following his defeat to world No.3 Ruud.

JUST IN: Roger Federer weighs in on chances of coaching after retirement

Rublev has now taken to social media to thank fans for their support, and claimed that his experiences showed him that he can also become a better person. “Torino thank you so much for all your love and support during the week that I didn’t deserve,” Rublev tweeted.

“But what I felt this week with your kindness and support, shows me that I can be a better person and  better player. It means more than a world to me. Thank you.”

Rublev was in a reflective mood after the inspired Ruud proved too good for him in the knockout stages of the tournament. “Of course, there [are] a lot of positive things to take,” he said. “I can be grateful for the week. I [made the] semi-final. I was here. We’re the best eight players.

“All the players are dreaming to play here, and I was part of it. The rest of the players, they’re not here, so obviously it’s better to be here and to lose every match than not to be here at all. I did semis for the first time, I’m happy.”

Russia’s invasion of Ukraine in February has had wider sporting consequences and a huge impact on Rublev, who has been forced to compete under a neutral flag. He was banned from this year’s Wimbledon after the All England Tennis Club ruled that all Russian and Belarusian players could not compete at SW19.

And Rublev used his platform at the ATP Finals to call for his peace after an earlier group stage victory over Russian compatriot Daniil Medvedev. He appeared to send a message about the war in Ukraine by writing the word ‘peace’ on an on-court camera three times, followed by “All we need”.